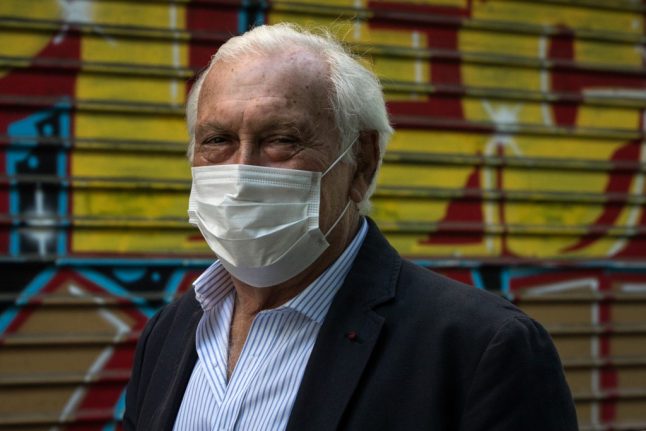 Jean-François Delfraissy, president of the Scientific Council convened by the French government to advise on coronavirus-related measures, has laid out a strategy for the months ahead.

The Scientific Council's role is advisory, but throughout the crisis they have been closely consulted by the government on health measures to contain and control the spread of the virus, including the strict nationwide lockdown brought in on March 17th.

Delfraissy, 72, a doctor and immunology specialist, gave an interview to French newspaper Le Parisien in which he laid out the four possible scenarios that the government faces over the rest of 2020. He was speaking as on Thursday the Council published its seventh consultation paper. The Scientific Council has advised the government throughout the epidemic. Photo: AFP

The four scenarios are; the virus goes away or stays at very low levels, a second critical cluster appears like the one in Mulhouse at the start of the epidemic, a slow deterioration of the general situation in autumn with more hospitalisations and finally the worst case scenario – the return to a critical situation of infections and hospital pressure.

But even in the worst scenario, the country would not return to a generalised nationwide lockdown, he said.

He told Le Parisien: “The Scientific Council, what we are saying is: whatever happens, we will not be able to redo a generalised lockdown in France.

“The first time, it was essential, we had no choice, but the price we have to pay is too high.

“The population would certainly not accept it, the economic consequences would be major and, even from a health point of view, this is not desirable – do not forget that, apart from Covid, there were all the other patients who had delays in diagnosis during this period.”

He added, however, that some areas could see the return of lockdown measures if they show a 'cluster' of cases, saying: ” I am firmly convinced that if it starts up again, it will start up again in the Paris region.”

He cautioned that the virus has not gone away, and that people need to remain cautious and follow health precautions, but he said it is for the present under control, thanks to the testing and tracing strategy now in place.

He said: “Today, there are between 1,000 and 3,000 new infections per day in France, compared to 70,000 to 100,000 at the beginning of March.
“This is due to the containment and the very strong cluster identification strategy, but also to the virus itself.
“It is visibly less likely to circulate when temperatures rise. Barring exceptional events, the situation is under control for the next few weeks and even the summer months.”
IN MAPS How the coronavirus epidemic is receding in France A military hospital was set up in Mulhouse, one of the earliest epicentres of the epidemic. Photo: AFP
At the beginning of the outbreak France suffered one of the highest levels of infections and deaths in Europe, although the strict nationwide lockdown brought case numbers down and France's death toll now stands at 29,065, below that of the UK and Italy.
Many of the earliest cases centred around a 'cluster' in Mulhouse in eastern France, where thousands of people from all over the country attended a church event.
Delfraissy admitted that France had been too slow with its testing programme, saying: “Since the release of the lockdown, we have sufficient means to identify the outbreaks of infection.
“That's what we didn't do in February, let's face it! That was Germany's strategy. We could have had the same evolution of the epidemic. But there was the great evangelical rally in Mulhouse, which spread the virus throughout the country, and there was a lack of tests.
“At the beginning of March, we were doing about 4,000 tests a day, whereas the Germans were already at about 70,000. Now we have caught up and are at the same level as them, at last!”
France is now operating a test and trace strategy, where everyone who tests positive gives a list of their contacts to health authorities, and those people are then contacted and tested.
After some delays, it has also now rolled out its coronavirus tracing app, intended to alert people to casual contact with a person who later tests positive, such as fellow Metro passengers or café customers.
READ ALSO EXPLAINED How France's coronavirus tracing app works
Although there is a lack of scientific consensus, many believe that the virus will recede during the summer months, but that raises fears of a 'second wave' of cases in the autumn.
Delfaissy said: “If we look at the history of major pandemics of respiratory viruses, we see that eight out of ten regress spontaneously in European countries during the summer.
“On the other hand, you have five out of ten that recur in the autumn.
“We must remain extremely vigilant.”