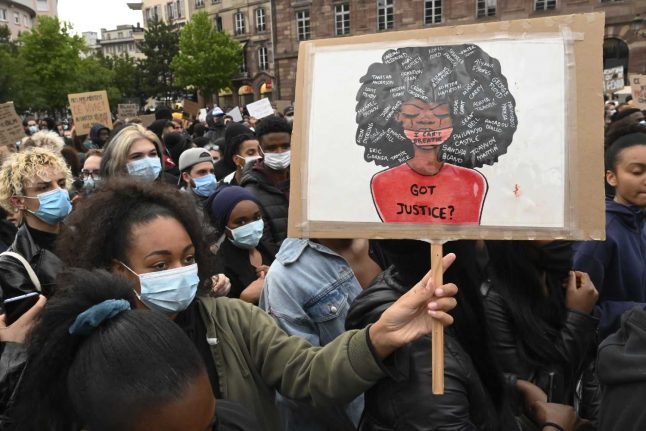 A woman holds a sign at a protest in Strasbourg, eastern France. Photo: FREDERICK FLORIN / AFP

A new protest has been called for Saturday near the Eiffel Tower in Paris under the slogans “Let us breathe”, “No justice, no peace”, echoing the words used since Floyd's death sparked demonstrations across the US.

The call follows a tense 20,000-strong rally in Paris on Tuesday, remembering the death of black 24-year-old Adama Traore who died in police custody in 2016.

His death has long been a rallying cause for critics of the French police.

French authorities have banned two demonstrations against police brutality planned on Saturday in front of the United States' embassy in Paris, citing a coronavirus restriction on gatherings of more than 10 people.

There are also calls for demonstrations in Marseille, Bordeaux, Lille, Nantes and Metz.

Adding to tensions, the contents of a private Facebook group reserved for police members were published by the online media SteetPress on Thursday.

In the group, police officers repeatedly use racist and sexist terms and mock victims of police brutality.

“If the facts are proven to be true, these comments are unacceptable and seriously damage the honour of the police,” said Interior Minister Christophe Castaner.

Paris prosecutors quickly opened a preliminary investigation after a call from the minister. He had pledged on Wednesday that “every mistake, every excess, every word including racist expressions” by police would be “the subject of an investigation, a decision, a punishment”.

In another embarrassment, reports said a black police officer filed a complaint against six white colleagues in December 2019, after discovering an abundance of racist messages on a private Whatsapp group, often concerning him.

“It suffers from behaviour which in no way corresponds to the republican values it defends.” Government officials say incidents of racism are the deplorable actions of individuals, whereas critics say there is a systemic problem.

Black actor Omar Sy — best known for this role in the 2011 comedy “The Untouchables” — weighed in on the debate on Thursday, calling on the French to “wake up” and drawing parallels between the deaths of George Floyd and Adama Traore.

“Like Adama Traore, I ran when I crossed the path of the police. I didn't have an open microphone to say how real the fear of dying in the hands of the police is,” Sy said.

Traore ran from the police during a dispute over an identity check, before being apprehended.

He died after he was pinned to the ground with the combined body weight of three arresting officers, according to the testimony of one of them.

Last Friday, French medical experts said Traore did not die of “positional suffocation”, ruling out the officers pinning him to the ground as the cause of his death.

But on Tuesday, a new probe commissioned by the Traore family said his death was indeed caused by the arrest technique used.