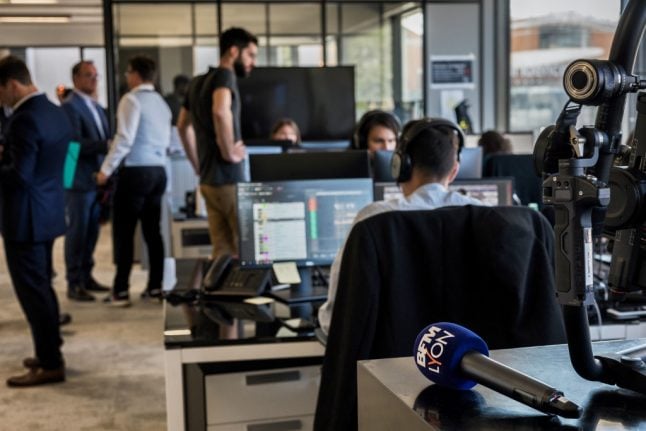 Being an employee in France has plenty of benefits. Photo: AFP

There’s a whole range of perks and extra rights that make France an attractive place to be an employee, although don’t confuse that with being lazy – French workers generally come out pretty well in comparative productivity surveys.

But as France has mountains of special programmes, complex labour agreements and perplexing regulations and rules, it can be tough to understand which benefits (avantages sociaux) you are actually entitled to. A lot of French workers, especially in the private sector, actually don’t benefit from the famous 35-hour week. Photo: AFP

The 35-hour week is probably France’s most famous labour law, but it’s also a bit more complicated in reality. In actual fact most French employees work more than 35 hours a week, the average is 39 hours, just under the European average of 40.3.

But if you work more than 35 hours a week bosses may have to compensate you for the extra hours worked, and this time back in lieu is known as Réduction du Temps de Travail or RTT days.

The bad news is that not everybody is entitled to this – certain professions, particularly in the private sector – have opted out and generally people in management or executive jobs do not get them.

Although there is some talk of lowering the limit still further and introducing a 32-hour week.

READ ALSO EXPLAINED: Why France’s 35-hour week is such a sacred cow

If you take public transport to and from work your employer may have to help cover the cost.

If you have an abonnement (monthly pass) for the bus, Metro, train, RER or tram you may be entitled to claim 50 percent of the cost of this back from your employer.

This is normally done automatically through your wages but in some companies you may have to apply separately. So make sure you go to HR and ask for the form to fill in. If you are freelance at a company then the chances of having your travel refunded may depend on the amount of hours you do.

Tickets restos or luncheon vouchers are often distributed to workers whose company does not have a subsidised canteen – in total around four million employees in France get them.

The vouchers used to be paper but are now generally charged up on to smart phones or cards.

4. Paid days off for weddings

Your French boss has to give you four days off when you get married and five days off if your spouse or child dies.

But you are also guaranteed a day off when you and your partner join in civil union (PACS).

And when that son or daughter, whose birth brought you 16 weeks of maternity leave if you are the mother or 25 days paternity leave for dads (unless you have twins in which case it’s 28 days), gets hitched you are entitled to a day off to attend the wedding. The majority of medical costs in France are covered by the State under the assurance maladie system with your carte vitale but most treatments are only reimbursed to a certain percentage.

To recoup the full amount, most people have top-up insurance known as a mutuelle and since 2016 companies have been obliged to pay at least half the cost of this.

Many companies pay the full cost and offer policies that cover partners and families as well as an extra perk, but 50 percent is the statutory minimum.

Your French boss has to give you 16 weeks of paid maternity leave. It generally breaks down as six weeks before the birth and ten weeks after. Though many expectant mothers get notes from their doctors to stop working earlier.

To qualify for paid maternity leave you must be registered with France’s social security system for at least ten months before you give birth. You must have worked at least 200 hours over the three months preceding.

New dads are now entitled to 25 consecutive days off, which includes weekends, following the birth of a child after President Emmanuel Macron doubled the leave allowance in 2021. If a family welcomes twins, the father gets 28 days off.

In most cases the government is responsible for paying you during paternity leave, with similar caps placed on earnings, as is the case with maternity leave. French workers are generally quite willing to fight any attempt to take away their rights. Photo: AFP

In bigger companies you might benefit from discounted cinema and performing arts tickets through your worker’s council (Comité d’entreprise). If your employer has more than 50 workers, elections must held to name people to the council. The council then, among other services, frequently offers cultural or travel offers to workers.

Yes, France has a minimum wage (known as Salaire minimum de croissance but referred to by almost everyone simply as le SMIC), so make sure you are not being paid what you legally deserve.

The perks outlined above are those covered in law, although as explained not everybody gets all of them.

However most jobs are also covered by conventions collectif, which are collective bargaining agreements struck between employee representatives and companies, sectors or even whole professions, and these often include extra benefits such as more holiday, extended maternity leave or overtime payments.

If you are covered by one of these it will be listed on your payslip along with the name of the convention that covers you. These are all published so you can then go and look up what other nice perks little perks somebody has once negotiated on your behalf.

If you’re lucky enough to have a phone registered in an EU country than you don’t need to worry, thanks to the EU’s cap on charges for people travelling, but non-Europeans need to be careful with their phone use abroad.

First things first, if you are looking to avoid roaming charges, be sure to go into your settings and turn off “data roaming.” Do it right before your plane lands or your train arrives – you don’t want to risk the phone company in your home country starting the clock on ‘one day of roaming fees’ without knowing it.

But these days travelling without internet access can be difficult and annoying, especially as a growing number of tourist attractions require booking in advance online, while restaurants often display their menus on a QR code.

So here are some techniques to keep the bills low.

Before leaving home, check to see what your phone plan offers for pre-paid roaming deals.

For Brits, if you have a phone plan with “Three” for example, you can ask about their “Go Roam” plan for add-on allowance. You can choose to pay monthly or as you go. Vodafone offers eight day and 15 day passes that are available for £1 a day.

For Americans, T-Mobile offers you to add an “international pass” which will charge you $5 per day. Verizon and AT&T’s roaming plans will charge you $10 per day. For AT&T, you are automatically opted into this as soon as your phone tries to access data abroad.

These all allow you to retain your normal phone number and plan.

Beware that these prices are only available if you sign up in advance, otherwise you will likely be facing a much bigger bill for using mobile data in France.

However, if you are travelling for a longer period of time it might work out cheaper to turn off your phone data and buy a pre-paid SIM card in France.

In order to get a pre-paid SIM card, you will need your passport or proof of identity (drivers’ licences do not count).

Keep in mind that you will not be able to use your normal phone number with the new SIM card in, but will be able to access your internet enabled messaging services, like WhatsApp, Facebook and iMessage. Your phone will need to be ‘unlocked’ (ask your carrier about whether yours is) in order to put a new SIM card in.

Here are some of the plans you can choose from:

This is one of France’s largest and most reputable telephone companies. The “Orange Holiday” SIM card exists specifically for tourists. At €39.99, you will get a SIM card that will enable you to make and receive calls and texts from a French phone number. You will have unlimited calls and texts within Europe, as well as two hours of calls and 1000 texts outside of Europe (for messaging people at home, for example). You will also have access to 30GB of data in Europe.

The initial plan is valid for 14 days, and begins as soon as you begin calling, texting, or surfing the web. In order to get this SIM card, you can go into any Orange store and request it. Some supermarkets and airport kiosks might also carry this SIM card.

SFR is another well-known French phone company. Their pre-paid SIM card is called “La Carte,” and they offer several different options based on how much internet, calling, and texting you want access to. The basic plan is for 30 days and starts at €9.99 a month, which includes a €10 credit. Once the card is in your cellphone, you can add on a top-up option as needed.

You can buy this SIM card either online or in an SFR store.

This is the French phone company that operates in conjunction to the post office. What is especially convenient about this SIM card is that you should be able to get it at any post office in France. Plans range from €5 to €30 based on the number of days and the amount of calling, texting, and internet you are looking for.

Finally, Bouygues Telecom also has some offers for prepaid SIM cards. Their plan, the “My European SIM” is especially made for tourists. It costs €39.90 and allows you unlimited calling and texting in France and Europe. The plan offers 20Gb of data. You can plan ahead for your trip by ordering this card online, but you can only activate it once you arrive in France.

The card actually comes along with a tourist guide (offered in 10 languages) and a map of Paris Metro.

Some mobile phone carriers offer very affordable monthly plans, which might look appealing to tourists. However, these plans will continue charging you after your vacation has ended, and many involve complex processes, including sending a registered cancellation letter (in French), in order to cancel the plan.

If you have a UK-registered mobile phone, check your plan carefully before travelling. Before Brexit, Brits benefited from the EU cap on roaming charges, but this no longer applies.

In short, check before you set off and don’t assume that because you have never been charged extra before, you won’t be this time.