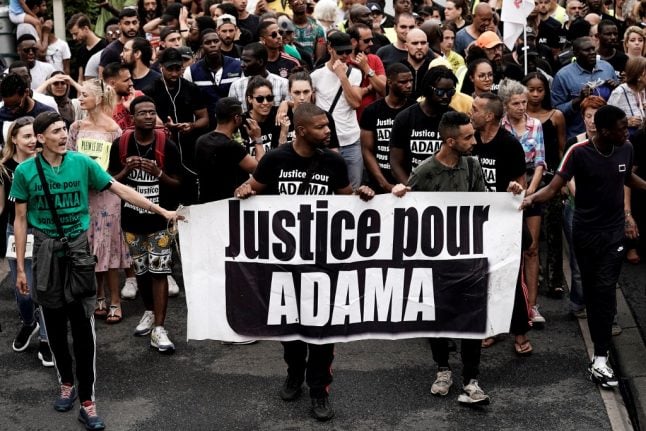 Thousands gathered in Paris for protests which were largely peaceful, but ended with scuffles with police, tear gas and street furniture set on fire.

Already many supporters before the Porte de Clichy court for the #JusticePourAdama rally . pic.twitter.com/vpVPK9f1NT

The protest started in the late Tuesday afternoon outside a court in northern Paris, before projectiles were thrown and the police used tear gas to disperse the crowd, AFP journalists witnessed.

Sporadic clashes broke out near the city's main ring road, with stones thrown at the police, who responded by firing rubber bullets. Interior Minister Christophe Castaner responded by saying that “violence has no place in a democracy”.

Other protests were held across France, with 2,500 people attending a rally in the northern city of Lille, 1,800 in Marseille, and 1,200 in Lyon. What was the protest about?

The protest was sparked after a verdict on Friday in a four-year investigation into the death of Adama Traore, who died after being arrested in 2016.

Among the banners calling for 'Justice pour Adama' were many referencing George Floyd, the American man whose death at the hands of police has sparked protests across the US. Many in Paris also took to one knee, in an echo of Colin Kaepernick's protest against police brutality and had slogans in English including 'Black Lives Matter' and 'I can't breathe' echoing the US protests. Who was Adama Traore?

A 24-year-old man born in the Paris suburb of Beaumont-sur-Oise who was arrested in 2016 after a dispute over a police identity check.

After a brief chase he was arrested and one of the three arresting officers has told investigators that they pinned Traore down with their combined bodyweight.

Traore lost consciousness in their vehicle and died at a nearby police station. He was still handcuffed when paramedics arrived.

Since then, there have been four medical reports into the cause of his death, with experts failing to agree whether the cause of death was suffocation after the police pinned him to the ground or whether his underlying medical conditions and possible presence of drugs in his body contributed to his death. Is this type of incident unusual in France?

Sadly, no. France's black and North African communities have frequently made accusations of bias and violence against French police and racially mixed areas – in particular Paris' northern suburbs – have seen regular clashes with police and accusations of police brutality.

During the lockdown there were several nights of running battles between police and locals after a motorcyclist was seriously hurt during a police stop.

In May the French-Algerian actress Camelia Jordan caused a storm of protest when she said that people “get massacred” by Police in the Paris suburbs because of the colour of their skin.

Over the years there have seen a string of high-profile cases, including the death of two young men during a police chase in 2005 in Clichy-sous-Bois which lead to three weeks of rioting.

More recently the Paris suburb of Les Ulis saw rioting over a case in which a youth worker named Théo was beaten and allegedly raped with a police baton.

During 2019 there was a national conversation about police violence after injuries during 'yellow vest' protests, but many campaigners said this problem had existed for years in areas that are poor, racially mixed and largely ignored by the media.

What do the police say?

French police chiefs do not accept that there is a problem with violence or racism within their ranks.

He said he sympathised with the “pain” officers must feel “faced with accusations of violence and racism, repeated endlessly by social networks and certain activist groups”.

The Paris police force “is not violent, nor racist: it acts within the framework of the right to liberty for all”, he insisted in an email to the city's 27,500 law enforcers.