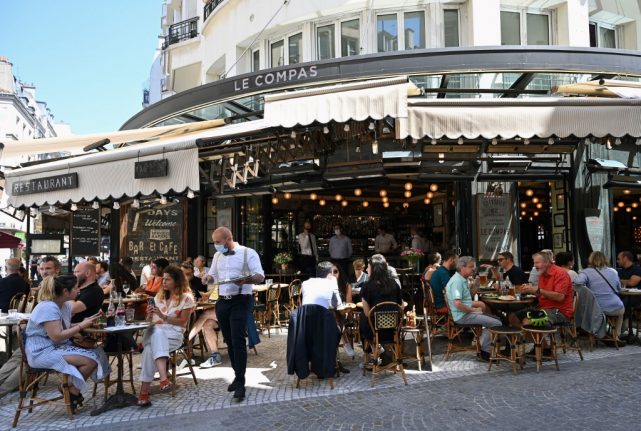 “I am thrilled,” said Mariette, who was drinking her first in-house coffee in three months.

Sitting outside in a small restaurant at Place des Vosges, in Les Marais – an area beloved both by Parisians and tourists in the heart of the capital – Mariette was accompanied by her sleeping baby granddaughter.

For the first time in a very long time, she said, life was getting back to normal.

“C’est formidable,” said Meriette, who was enjoying the calm of the square, sipping her tea while her granddaughter slept in the stroller beside her. “I am thrilled.” pic.twitter.com/mW8PnhKMkV

France's cafés, bars and restaurants were closed down by order of the government on March 15th – two days before the strict nationwide lockdown began.
'D-Day'

But as of, June 2nd, the beginning of “phase 2” of the lifting of lockdown, restaurants could get back in business – provided they kept with a long list of health rules.

In the greater Paris region Île-de-France, only restaurants with an outdoor areas – terraces –  could reopen, as the region’s coronavirus levels remain too high for the government to deem it safe to relax the rules as much as they have in the rest of the country.

“It’s kind of like D-day for us,” said Alain Marcillac, the owner of a restaurant in the Marais, who was waving around the long, yellow ruler he used to check that all his outdoor tables were spaced out with the required one metre distance.

“We'll have too many tables,” he concluded solemnly, adding that, with his regular service slashed in half, he “would not be doing any miracles,” money-wise.

All restaurants must space out their tables with at least one metre. No table can seat more than 10 people (the maximum limit on groups in public spaces in France still stands). pic.twitter.com/X5cv7Qr58i

A long string of financial hits

French restaurant owners, especially those in Paris, had already suffered heavy economic losses from the mass-strike movement that brought transport in the region to a virtual standstill for December and January.

Before that, they saw their incomes plunging for several weekends in a row during the 'yellow vest' protests in the spring of 2019.

Counting himself lucky to be one of the Parisian restaurant owners with a terrace, Marcillac was determined to make this work. On a regular, pre-coronavirus day, Marcillac said he would have “about 30 customers on a morning like this,” a warm and sunny Tuesday, perfect for sitting outside.

Today, there was just one guest, a Frenchman who had come back to Paris for work after spending lockdown in the countryside along with numerous self-exiled Parisians.

“It’s nice to start the morning like this (..), to be able to sit a little bit outside before spending the day in the office,” he said, untangling his mask from one of his ears to take a sip of his espresso.

A little further down the road, Christelle was enjoying a glass of wine in the sun. She had come all the way from the Brittany coast to Paris to go to the hairdresser.

It's what I like best in Paris. Having a stroll, having a drink.. Things need to restart again.”

Like most of the guests sat around her, Christelle was not wearing a mask. While staff need to wear masks at all times, customers may remove them when seated.

“People are not too close to each other, so I’m not worried,” Christelle said.

Inside restaurants, an area off-limit for Parisian guests at least until June 22nd, the tone was different.

“Everyone has their mask on?” yelled one employee at a café at Place des Vosges, in which the employees was working at full speed to get their lunch service ready.

Along with the wearing of masks, restaurants are supposed to disinfect tables between each customer and ensure that everyone washes their hands at the entry.

“We keep hand sanitising gel readily available so that the clients can help themselves as much as they want,” said Carole Bourgoin, the manager of Cour des Vosges' hotel restaurant. Restaurants in Paris can ask for permission to extend their outdoor areas in order to be able to receive more customers while keeping with health rules. Photo: AFP

Closed off streets to cars

Bourgoin's restaurant benefited from a decision by the City of Paris to close off certain streets to cars until the end of September, to allow for owners to widen their outdoor spaces and seat more tables.

“It's a real advantage to us,” she said, pointing to the extra tables spread out on what used to be parking spots for cars.

“We've been able to add about six tables and the whole street has been pedestrianised,” she said.

Here's a map over the streets that have been closed off to cars so that #restaurants in #Paris can extend their terraces and receive more people (ref thread below) https://t.co/YEGdbV5UAR

But not everyone had received permission to expand their terraces yet.

Mokhtar Ashry, owner of a restaurant just next to the Bastille square, was giving the e-scooters parked just outside his slim terrace a sour look.

Soon, he said, he hoped to replace the scooters with some of his many unused tables, piled up inside.

Slightly reopening was however “much better than staying closed,” he said

“It gives back morale to the staff. We are beginning a normal life again,” he said.