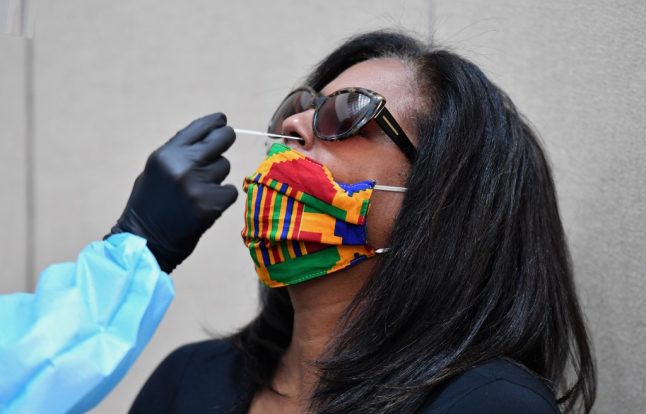 Since France lifted the first of its lockdown restrictions on May 11th, people have been anxiously eyeing coronavirus infection rates to see if the new freedoms would provoke a second wave of cases.

But latest data shows no sign of a second wave, and in fact that the picture is so positive that the government feels able to lift another tranche of rules from June 2nd.

The new rules for 'phase 2' of lockdown in June go further than many had anticipated to reopen the country – with bars and cafés reopening fully everywhere apart from the greater Paris Île-de-France region, school reopenings accelerated and all restrictions on travel within France scrapped.

As Prime Minister Edouard Philippe laid out the new restrictions, France's health minister Olivier Véran presented the data that lead the government to feel able to lift the restrictions. Both he and the Prime Minister were keen to point out that the virus has not gone, and that people should remain careful and keep observing social distancing and hygiene measures such as handwashing.

Probably best explained by German chancellor Angela Merkel, the R rate is the number of people each coronavirus patient infects. If it is more than 1, the total number of patients will keep increasing, if fewer than 1 then the virus is under control and numbers will keep falling.

In France this is currently 0.77, so comfortably under 1 even after three weeks of slightly freer movement when shops and businesses reopened on May 11th.

However the government will be keeping a close eye on this once bars and cafés reopen and people start travelling more freely around the country. Since May 11th France has been divided into two zones – red and green. The red zones covered around a fifth of the country and denoted areas where the virus was actively circulating and there was still pressure on hospitals.

However in the revised map presented on Thursday all the red zones had disappeared and the vast majority of the country is now green.

The only exceptions to this were the overseas départements of Mayotte and French Guiana and the greater Paris Île-de-France region, which were depicted in orange. The green/orange zone map for phase 2, which runs between June 2nd and 22nd

Orange signifies an area that no longer qualifies as a red zone, but is still a cause for concern.

“We have decided that decisions in Île-de-France should be taken on a regional level and not a départemental level,” Véran said, due to the high level of movement in the area, particularly of people commuting into Paris from the suburbs.

“I repeat, being green does not mean the virus is gone,” the health minister said, stressing that the situation would be closely observed in all départements.

Départements in orange will keep more lockdown restrictions than green ones with only a partial opening of cafés and a delayed opening of gyms, swimming pools, theatres and museums. One of the key metrics in controlling in the virus is whether a country's health services are coping or risk being swamped. The number of patients in intensive care also provides one of the best indicators for the death rates over the coming days, so in France the situation in hospitals has been watched very closely.

At the peak of the epidemic there were 7,148 coronavirus patients in intensive care in France. At the beginning of the outbreak the country had just 5,000 intensive care beds, which was hastily increased to 9,000.

On Thursday there were 1,429 coronavirus patients in intensive care, and the number has been falling steadily since April 9th.

In his presentation, Véran also included a regional breakdown of pressure on hospital intensive care units. In the vast majority of the country, ICU units were running at 40 percent of capacity or below.

In Paris and the surrounding départements capacity was between 40 and 60 percent, while only one place – the overseas département of Mayotte – ICU units were above 60 percent of capacity.

Since May 11th more than 25 'clusters' of cases have been detected, but authorities say this is not necessarily a bad thing – it means that France's test and trace policy is working. Testing has been a sore point in France, with limited testing capacity meaning that at the height of the outbreak only those with severe symptoms were tested.

However since May 11th the government has been running a 'test and trace' programme meaning that anyone who suspects they have the virus gets tested, if the test is positive they then provide a list of people they have been in contact with who also get tested and self-isolate.

The tracing app, intended to supplement the programme by tracking more casual contacts such as people in the same carriage on the Metro, was not ready for phase 1 but will be available for use from June.

Among the people tested so far, 1.9 percent have tested positive for the virus, said Véran.

In much of mainland France the rate is 0.5 percent or lower, with the overseas département of La Réunion showing a particularly high rate of 10 percent.

Nevertheless there were 13 départements, plus the Île-de-France region, where more than 6 per 100,000 inhabitants tested positive last week, which were identified as areas of concern.

Of course we're not out of the woods yet, and the next three weeks will be crucial.

With the majority of restrictions lifted from June 2nd, daily life in France will start to look a lot more normal with people mingling in bars and restaurants and travelling to other parts of France.

The next revision of the lockdown is on June 22nd, and whether it is a further loosening of the rules or a reintroduction of restrictions depends entirely on how all these numbers look three weeks from now.