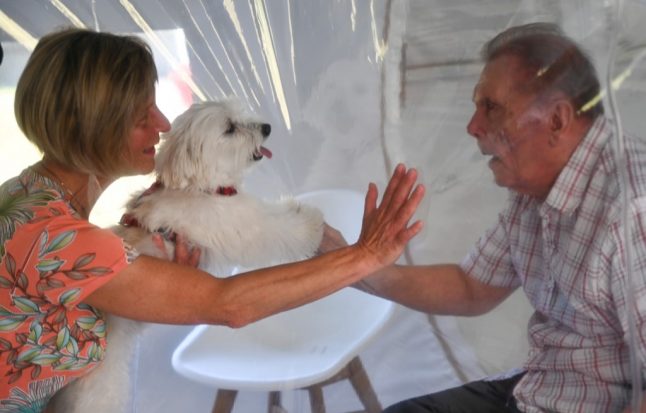 Nathalie Szczepaniak caresses the hand of her husband Joseph, a care home resident, as the couple reunites after weeks without a visit because of France's coronavirus lockdown.

But this is no ordinary reunion.

The couple meets in an anti-virus “bubble” at Joseph's nursing home in Bourbourg, northern France, separated by a clear plastic sheet that allows them some physical contact, face-to-face, without the risk of infection.

Nathalie holds up the couple's dog, a white fluffy creature named Valco, so that Joseph, who has Parkinson's disease, can press his palm to its paw through the plastic. “You are eager to see your dog? Well, look, here he is,” she says, smiling tenderly as Joseph reaches out weakly, his eyes shining as Valco tries in vain to climb onto his master's lap on the other side of the sheet.

The new coronavirus has proved deadliest for older people, and France imposed a strict no-visit policy at retirement homes when the country was placed in lockdown in March in a bid to curb infections.

So far, the virus has killed 10,336 people at French care homes, authorities say, more than a third of the national toll of 28,596.

But the lack of contact has been hard to bear for nursing home residents, many of whom are battling dementia, and psychologists have warned that the trauma of perceived abandonment can be fatal for some.

Confined to their rooms, “the residents suffer tremendously” and some “just let themselves die, they stop eating, they no longer find meaning in life,” said Audrey Bernard, director of the Bourbourg nursing home.

The separation has been hard on loved ones too.

“We couldn't visit him for two months… This week I called for an appointment, and voila, the surprise!” Nathalie Szczepaniak said, pointing to the plastic reception tent she discovered upon arrival.

She had been expecting to see her husband only from a distance, but instead the igloo-like contraption allowed them to experience something as close as possible to real contact. “We can touch each other, you can feel the body heat through the (plastic)… It is very, very, very nice,” Szczepaniak said, a big smile on her face.

Erected just last week, the inflatable tent comprises a central bubble that acts as the reception area, connected to an entrance on either side that can be closed airtight.

“You can see an improvement in the people who've already had visits… there is renewed energy, a newfound interest, you can see the smiles on the faces both of the families and the residents,” Bernard told AFP of the innovation.

“The families really feel like they're with the resident, there's no feeling of separation, it allows them to touch each other safely… They are both inside, safe and secure, they can hear each other easily, as if they were in the same room.”

Before the bubble, the home had tried to facilitate family access by placing residents in the on-site restaurant, with visitors waving and talking to them through the windows, from outside.

But they had trouble hearing each other, and many found the experience frustrating.

“Today, with this bubble… they can talk, see each other without masks and almost touch,” said Bernard, who recounts seeing one couple kiss through the plastic. 'I saw him smile'

“It is excellent. Excellent!” exclaims Nathalie. “He did not even notice the plastic. And I saw him smile, something that I haven't been seeing any more.”

After she leaves, the bubble is disinfected before the next visitors to arrive: a woman coming to see her father, his granddaughter in tow.

The bubble tent receives between six and eight visits a day, each lasting 30 to 45 minutes, and there is already a long waiting list.

“We wanted to restore a humane dimension to a totally inhumane situation while guaranteeing safety, the non-transmission” of the virus, said Pierre-Stephane Dumas, of BubbleTree, the company that designed the tent.

A prototype was erected at the Bourbourg site without cost for a two-week trial period, with a view to making improvements before others are rolled out to more French care homes.

Several have already shown interest, Dumas said, but the wind and rain-resistant installation, complete with electricity, costs between €7,500 and €10,000 to manufacture, meaning financing will have to be found to reduce overheads.