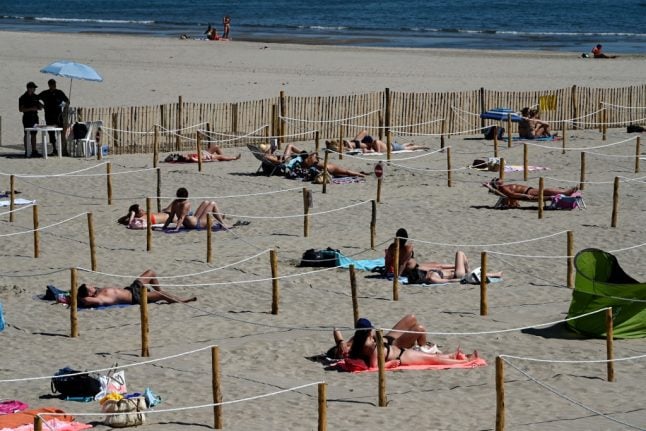 The beaches of the future? Sun bathers are spreading out as beaches in France begin to reopen. Photo: AFP

French Prime Minister Edouard Philippe came bearing good news for the restaurant and tourism businesses on Thursday, as he laid out the plan for “phase 2” of the easing of France’s strict, nationwide coronavirus lockdown.

“Freedom will be the rule and restriction the exception,” Philippe said, declaring that, in June, restaurants, bars, cafés, hotels and other tourism businesses would be able to – cautiously – reopen.

Everything will not open at once, and there will be strict health rules that businesses will need to follow throughout phase 2, which will last until June 21st.

A key factor for tourism businesses will be the lifting of the 100 kilometres maximum travel rule.

As of June 2nd, people will be allowed to travel as far as they want inside France. That means anyone aiming to go for a long-weekend will be able to do so without showing proof that their travel is essential.

When businesses can reopen depends on where in the country they are.

Most of the country has now been qualified as green zones – areas with low levels of coronavirus spread and weak pressure on hospitals – while the greater Paris region Île-de-France and two overseas départements, Mayotte and French Guinea, have been upgraded from red to orange.

Orange zones have coronavirus levels high for the situation to be concerning, but not high enough to prevent a careful reopening, according to the government.

MAPS: Where coronavirus cases in France are staying low

Beaches, parks and gardens will be opening across the whole country at the beginning of June, which means more people will be tempted to travel out of the cities for some fresh air.

As for tourism businesses, there are two main dates: June 2nd and June 22nd.

All tourism-related businesses – including campsites, gites, hotels and B&Bs – in green zones may reopen as of Tuesday, June 2nd. Those in orange zones will need to wait until June 22nd.

The same goes for restaurants, bars and cafés. In green zones, they can open from June 2nd, while in orange zones only those with outdoor terraces will be able to reopen on that date.

Museums, tourist attractions and theatres can also reopen on June 2nd in green zones, while orange zones must wait until June 22nd.

Calendar: The key dates to know for the next phases of France's lockdown Masks will play a key role in phase 2 of the lifting of France's lockdown. Photo: AFP

A lot of tourism spots in France depend on international travellers, but for now they will need to count on the tourism flow from inside of France.

When international travel outside the EU will be allowed has not yet been determined, but the PM said they hope to reopen to travel from inside Europe (including the UK) from June 15th – although this is still subject to discussion.

READ ALSO: When will I be able to travel to France again and will I be quarantined?

All hotels, gites, campsites, restaurants, bars and other tourist businesses will need to comply with strict health rules.

These include staff and visitors wearing masks, disinfecting areas between visitors, installing protective barriers where needed, and introducing rigorous health routines for staff such as handwashing and wearing gloves. Further precise details are expected on this from the government.

Representatives from France's restaurant sector have published a 10-page manual that is currently being examined by the government, which outlines detailed guidelines for businesses in the sector of how to safely reopen without putting their customers or staff at risk.

READ ALSO: What are the new rules in France for reopening cafés and restaurants? Scenes in Paris on Thursday, as the PM announced that the capital's parks would reopen this weekend as a step into further easing the lockdown. That means Parisians will have more space to spread out on. Photo: AFP

Local authorities will have leeway to impose extra rules if needed. Even in phase 1 some local mayors closed beaches and hiking trails over fears of overcrowding.

Decisions on aspects such as making masks compulsory on beaches or in parks will also be taken by local authorities.

Restaurants, bars, hotels and other tourist businesses have been among those suffering the largest economic losses during the coronavirus epidemic. They are dependent on people being able to move around freely, and have little or no leeway to have employees working from home.

After having closed down their businesses on March 17th alongside the majority of the rest of the country, the sectors had to remain closed May 11th, the date when France began to lift the lockdown.

Nearly three months later, many fear that a large chunk of the businesses will never reopen.

The government has promised to continue supporting the sector financially, and has said all tourism businesses will be able to access the 'solidarity fund' for each month throughout 2020.

The French solidarity fund provides individual grants to businesses of €1,500 a month, provided they have seen their incomes drop that month. There is also a larger, regional fund that gives larger grants to the hardest hit businesses.

Read all about the rules of the funds here, and whether they helped the businesses applying here. All beaches will reopen in June. Photo: AFP

What does not change..

No gatherings of more than 5,000 will be allowed before the autumn, which means that hotels, gites and camp sites will not be able to take in more than that many guests at the same time.

The 10-person limit will also be maintained on a national level, which means tourism businesses will need to adapt their practices to not having more than 10 people gathering at the same time in a group.

This also means nightclubs, game rooms and music venues will remain closed for the time being.

The government repeatedly stressed that the general health situation will be closely monitored on a local level and that what happens in “phase 3”, which begins on June 22nd, will depend on how the numbers develop in the three coming weeks.

An area “being green does not mean there is no coronavirus,” the health minister cautioned, as he urged the French to remain vigilant and careful in the coming weeks.

“The less we move around, the less we spread the virus,” Prime Minister Philippe said.