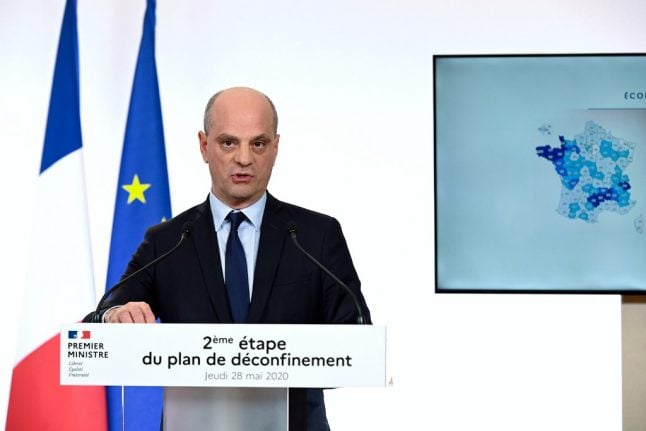 “Reopening schools has been one of our main goals,” said Education Minister Jean-Michel Blanquer as he presented the next steps France will take to progressively return more pupils back to class as of June 2nd.

That date marks the beginning of “phase 2” in the progressive lifting of the coronavirus lockdown imposed on March 17th by President Emmanuel Macron.

Stressing that the “method would remain the same,” based on “pragmatism” and “putting the health of pupils and employees first,” Blanquer said more schools would reopen in the weeks to come.

That means keeping restrictions on class sizes – 15 pupils maximum in schools, 10 in nurseries.

As of June 2nd, all of France's elementary and primary schools will begin to reopen “for at least part of the week,” the education minister said, while maintaining current practices of taking in smaller groups.

Secondary schools (collèges), which had so far only been able to reopen in green zones, would begin to reopen as of June 2nd, “both in green and orange zones,” Blanquer said.

As for high schools (lycées), they would reopen in green zones only. Orange zones – like the greater Paris region – would work to reopen for some technical college students only.

How many will go back to class?

While the goal is to reopen all schools except lycées, this will not mean all pupils will return to class at the same time.

The return will, as the government has stressed from the outset, will be progressive and adapted to local authorities' wishes.

Right now, more 80 percent of France's total infant and junior schools (maternelle and élémentaire) have reopened in over 90 percent of the country's communes, according to Blanquer.

Still only a marginal part of the pupils have returned to class, 22 percent in green zones and 14 percent in red.

There are also regional differences, so for example in the Brittany département of Finistère all primary schools are open but in the eastern département of Oise only around 50 percent are open.

Many parents opted out of sending their children to class, preferring to keep them home for the time being and give priority for parents working jobs where remote working is impossible.

Pupils return to nursery and primary schools around France today (Paris on Thursday) albeit in small numbers. Example: My kids' school 23 out of 125 (Parents of 60 kids applied, many choosing not to send kids back) Pupils not in every day.Priority given to children of key workers pic.twitter.com/vKzaVcQpUl

Sending children back to school will still be done on voluntary basis during phase 2.

The goal will be to progressively increase the number of children returning to class in the coming week, and ensure that all infant and primary schools “systematically receive pupils, at least for a part of the week,” Blanquer said.

“As health precautions will be maintained, groups will still be limited to 15 at the time,” Blanquer said, adding that, “everything will not be perfect from one day to the next.”

“What's important is that we move forward,” he said.

The oral exam of the baccalauréat  – the infamous end-of-high school test – has been cancelled, Blanquer confirmed.

This latter decision was received with a wave of relief on social media by anxious high schoolers, with tweets like “we love you, Blanquer” circulating shortly after the announcement.