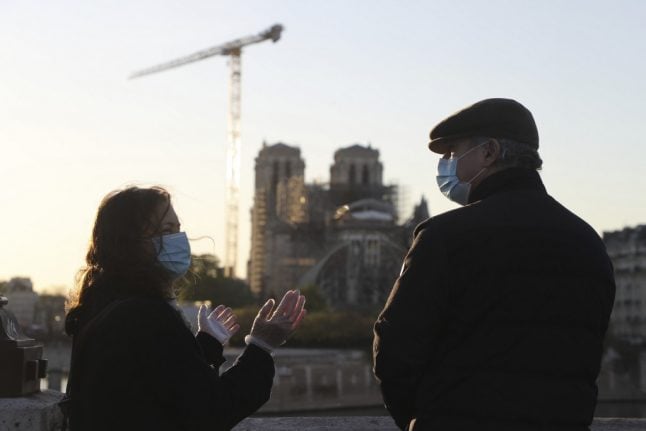 Masked, gloved and 1m apart - it's not a classic first date. Photo: AFP

Living up to various stereotypes, Nordic countries have published very frank advice on sex and dating during the coronavirus pandemic, while the Dutch have advised single people to set up a 'sex buddy' arrangement in order to limit social contacts while meeting sexual needs.

But in France things are a little more restrained, in keeping with a country that has always considered sex a private matter (to the benefit of various cheating politicians over the years).

France's health ministry has plenty of advice on sexual health and domestic violence during the lockdown period, and early in the lockdown officials confirmed that women could use old prescriptions to restock on supplies of the contraceptive pill, but advice on dating has not been published.

During France's strict two-month lockdown all non-essential trips out of the house were banned and dating did not count as an essential reason – which didn't stop at least one Frenchman giving 'visiting my mistress' as an excuse when stopped by police. A walk with a date is now allowed again. Photo: AFP

Even dating apps such as Tinder carried warnings about respecting lockdown rules, with users greeted with the message Ils font de la prévention, Prenez le temps, apprenez à vous connaître (they're doing prevention, take your time, get to know each other) when they opened the app.

But since May 11th the rules have relaxed a little.

When announcing the lifting of lockdown rules, French Prime Minister Edouard Philippe didn't specifically mention sex or dating, but did introduce a broader category of socialising.

You are now permitted to meet up to 10 people in a public place, and there are no restrictions on the number of people you can meet in a private residential dwelling.

READ ALSO What are the rules of socialising in France as lockdown lifts?

So meeting up with someone who caught your eye online is absolutely allowed.

However the government is recommending that we continue to practice les gestes barrières (hygiene gestures) with friends, family or dates when we meet up and those include not getting too close, washing hands frequently and avoiding handshakes or la bise (the French double cheek kiss).

More intimate actions are not mentioned in the government guidance, although if they are recommending avoiding a handshake I think we can guess their position on certain other activities.

(In Switzerland no guessing is required as a list of coronavirus-safe sex positions has been published, although we should point out that this was put together by the sex workers' association rather than the government).

This is advice rather than a rule however, so you won't be arrested or fined €135 if you choose to stroll hand in hand by the banks of the Seine with a new date. Even when the restaurants reopen, hygiene measures may not lend themselves to an intimate dinner. Photo: AFP

People aged over 65, as well as those in other vulnerable groups, are also advised to continue with self-isolation, although again this is advice rather than an order.

But it seems that many people are continuing to show caution and dating habits in France have changed.

Dating app Meetic reported that in the first week of lockdown use fell sharply as people focused on other things and tried to adjust to the new normality.

By week two, however, new sign-ups on the app had risen by 13 percent, the highest spike since January 1st (a traditionally good day for online dating as people's New Year resolutions kick in).

And even after May 11th, there is some evidence that people are spending a lot more time chatting on apps and dating sites, rather than rushing into a meeting.

With traditional first-date venues like bars, restaurants and cinemas still closed, a walk in the park is the only date available to many people (if they live in a green zone. In red zones, where the parks remain closed, it might be a walk in the street).

And some people are relishing the return to a slower, more gentle and old-fashioned form of dating.

“It's the perfect opportunity to take the time to get to know the person in front of you,” 31-year-old bar manager Véronique said.

“The mask, which allows you to see only half of your face, also encourages you to be less judgemental about your physical appearance.”

Face masks are not compulsory on the street – although they are on public transport and in some shops – but they are recommended.

But for others the thought of an awkward first date without any of the distractions of a restaurant, a film or a band was just too much to contemplate.

“I like to have first dates at a gig, then if it's not working out we can just dance or at least talk about the band,” said IT worker Olivier. “I think I will wait until things reopen before I start dating again.”

And for people in Paris even the traditional first-date lubricant of alcohol can be problematic as drinking is banned on the banks of the Seine and the city's canal banks in a bid to limit the crowds that usually gather there on summer evenings.