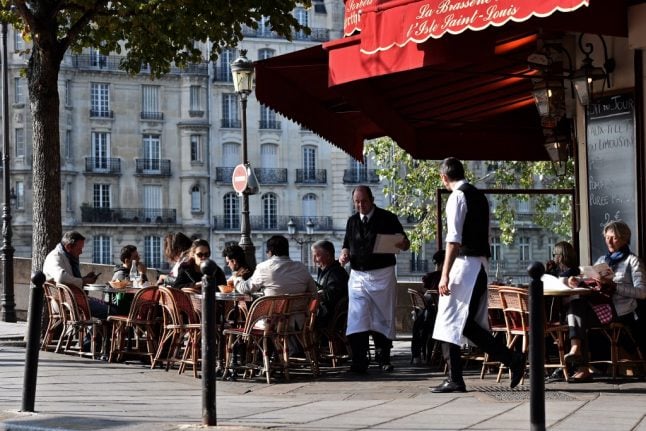 The French Prime Minister Edouard Philippe confirmed on Thursday that bars, cafés and restaurants around France will be able to reopen from June 2nd.

The PM confirmed that the country’s bars and restaurants will only be able to fully reopen as normal in “green zones” – areas with low circulation of the coronavirus – as of June 2nd, the date that marks the beginning of the second phase.

But in the greater Paris region of Île-de-France, which is designated an “orange zone”, due to the higher circulation of the virus and higher number of hospital patients, things won't quite return to normal.

In Paris and the surrounding départements only the outside terraces of bars, cafés and restaurants will be allowed to open from June.

The French PM also announced a number of rules for restaurants: Iconic Café de Flore in Paris might have to stay closed for the time being, while others reopen. Photo: AFP

Before the French PM's speech representatives from the restaurant sector thrashed out a 10-page manual mapping out guidelines for owners on how to safely reopen without putting their clients or staff at risk.

Here's a look at the main points of the industry guide:

Establishments to install hand sanitising gel at the entry so that customers can disinfect their hands before going in.

All customers to wear a mask when they enter a café, bar or restaurant or take it off once they have been seated.

Menus, tables, chairs and the like are to be disinfected between each customer.

Everyone will be asked to pay by card if they can.

All tables will need to be spaced out by at least one metre and no table can seat more than 10 people.

Waiters will not be able to switch tables, so one table will be served by the same waiter throughout the meal.

Establishments will need to set up markers on the floor to space out of queues – bar queues, entry lines, toilet lines and so on – and more generally lower the limit of how many people they let in at once for these rules to be respected.

There has been a lot of back-and-forth over whether buffets should be allowed to reopen or not, seeing as their self-serving nature increases the risk of spreading the virus.

In the document the restaurant representatives have sketched out strict rules for buffets, including introducing strict line systems and limiting how many people can serve themselves at once, plus installing “additional physical barriers” such as glasses or plastic walls protecting the areas. Restaurants have been able to run a limited take-away and delivery service during the lockdown. Photo: AFP

Several bar and restaurant owners have already expressed desperation at the idea of having to install plexiglas or improvised plastic barriers between their employees and clients.

“It breaks the link, the contact (between people) that is so crucial to our business,” said Olivier Bertrand, who runs a group of 250 chain restaurants in France, to France Info.

But what exactly are these “physical walls” that are causing such a stir?

The manual states that: “When it's needed, especially at entry points (receptions), extra physical barriers will be installed (glasses, temporary divisions).” It does not specify the kind of barriers, probably to give some kind of leeway to the owners to find solutions suited to their establishment.

In Paris, one restaurant has prepared plastic cloches hanging from the ceiling that provide individual protection for each customer, as shown in the video below.

“I think everyone is adapting,” Matthieu Manzoni, who runs the restaurant H.A.N.D, told AFP.

“I have the weakness to think it could be amusing to some, and either way we don't have a choice, it's compulsory.” People wearing a protective mask buy food to take away at a restaurant in Paris. Photo: AFP

While owners are eager to get back in business, many worry for their future as the new rules will both imply extra costs to set up and reduce revenue due to the new limits on customers.

French chefs earlier warned that up to 40 percent of them might never reopen after the lockdown.

“And for those that do reopen, if they reopen at half capacity, how will they do it?
“I am pragmatic: my establishment serves 80 covers. If we go to 40, when I've organised my staff for double that, I'm going to have to let go of half the staff,” said Bordeaux-based chef Philippe Etchebest, who is also a judge on popular TV cookery competition Top Chef, told French media.
READ ALSO: How to help your favourite French bistros survive the coronavirus crisis

The government has promised financial help for the struggling sector, but many remain pessimistic about the future.

“The health rules change everything a little bit,” said Bertrand.

“Our whole business model is shaken up today.”