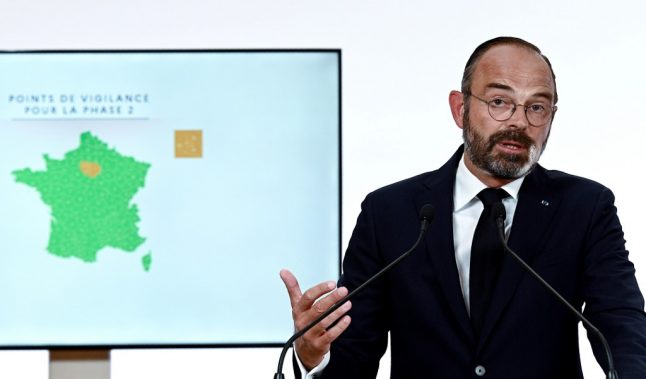 “Things are looking good, but not good enough to return everything back to normal,” said PM Edouard Philippe as he and other members of the French government presented the plan to reopen more of France from June 2nd.

That date marks the beginning of “phase 2” in the progressive lifting of the coronavirus lockdown imposed on March 17th by President Emmanuel Macron.

On Thursday, three weeks after France began to loosen the lockdown (on May 11th) the Prime Minister remained cautiously optimistic that the country would manage to dodge a second surge in the number of coronavirus cases.

“We need to remain very vigilant,” he said, adding “freedom will, finally, be the rule and restriction the exception.”

The long-awaited speech came after a day of talks with the Scientific Council set up to advise the government on its strategy to tackle the coronavirus epidemic.

Like phase 1, phase 2 will last for roughly three weeks, from June 2nd to June 21st.

From June 2nd France will begin to open its bars and restaurants for the first time since they were closed on March 14th.

The government will also accelerate the opening of secondary (colleges) and high schools (lycées). Cultural and sporting life will progressively return to normal.

Most shops and business that are still closed will reopen.

However some things won't change. Groups are still limited to a maximum of 10 people in public spaces, working form home is still recommended and vulnerable people, including the elderly and those with health problems still need to be protected.

Since the process to loosen lockdown restrictions began on May 11th, the government has repeated that all steps to follow will be taken progressively and be adapted to local differences.

Key in maintaining this goal was the government's coronavirus map, detailing the situation in each French département and designating it a colour (red or green) depending on the results.

Of the four regions that were coloured red – Île-de-France, Hauts-de-France, Grand Est and Bourgogne-Franche-Comté – most turn green in the revised map.

Île-de-France is now coloured orange –  – not red – a colour that until now has not existed on the definitive map. “We will particularly keep an eye on the situation in Île-de-France, French Guiana and Mayotte,” said Philippe, referring to the regions showing the highest levels of coronavirus circulation – the greater Paris region and two of France's overseas territories.

“We have decided that decisions in Île-de-France should be taken on a regional level and not a départemental level,” Véran said, stressing that the situation would be followed closely in all of the country's départements.

“I repeat, being green does not mean the virus is gone,” the health minister said. The restaurant sector has been suffered especially heavy losses during the coronavirus lockdown, taking massive financial hits from keeping shut for more than two months.

All employees would however need to wear a face mask at all times while customers would need to wear a mask whenever they were moving around in the establishment (they can remove it while seated at the table).

Night clubs, game rooms and show rooms will however remain closed for the time being.

READ ALSO: Masks and plastic screens – what dining out in France could look like from June The rule forbidding people from travelling more than 100 km from home in France will be scrapped as of June 2nd. That means people will be able to move around freely inside the country starting that date.

“The less we move around, the less we spread the virus,” the PM cautioned.

“I call on all French to show the same kind of responsibility as they have been showing throughout the crisis.”

The Prime Minister said current rules on international travel would be maintained until June 15th, but after that it aims to reopen the borders for travel from within Europe.

“Reopening schools has been a primary goal,” said Jean-Michel Blanquer, France’s education minister, stressing that the “method would remain the same,” based on “pragmatism” and “putting the health of pupils and employees first.”

As of June 2nd, all elementary and primary schools would reopen “for at least part of the week,” the education minister said, while maintaining current practices of taking in smaller groups.

Secondary schools (collèges), which had so far only been able to reopen in green zones, would begin to reopen as of June 2nd, “both in green and orange zones,” Blanquer said.

As for high schools (lycées), they would reopen in green zones. The oral exam of the baccalauréat  – the infamous end-of-high school test – has been cancelled, Blanquer confirmed.

Parks and gardens will be reopened in all areas as of this weekend – also those coloured orange – the PM said, adding that local authorities would retain the right to impose mask-wearing as a precautionary measure.

Beaches and lakes will also reopen on June 2nd.

Campsites will reopen on June 2nd in green zones and June 22nd in red zones.

Theatres and museums can begin to reopen as of June 2nd in green zones, while orange zones must wait until June 22nd.

Cinemas can reopen in the whole country as of June 22nd.

Wearing a mask will be mandatory in all these spaces.

What does not change..

Groups are still limited to a maximum of 10 people in public spaces, “contact sports” will not be allowed, night clubs, game rooms and show rooms will remain closed.