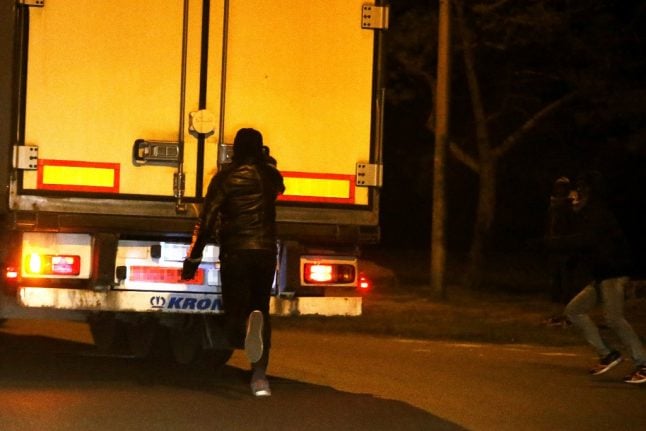 The migrants – 31 men and eight women – were found dead in the truck in an industrial zone east of London in October, sparking an international outcry.

The driver of the lorry has already admitted manslaughter over the deaths but Tuesday's arrests targeted the ring of smugglers suspected of organising the migrants' journey.

Police swooped in a series of raids around Brussels and Paris as part of a probe also involving British and Irish investigators.

In Belgium – where some of the victims stayed before their fateful journey – police held 13 people, including 11 Vietnamese nationals.

“The network set up by the smugglers is suspected of having likely transported up to several dozen people every day for several months,” Belgian federal prosecutors said in a statement Wednesday.

“The organisation focused on transporting refugees from Asia, particularly from Vietnam.”

Prosecutors suspect the gang organised the transport of the Vietnamese migrants in the container where they died.


Network operated even under lockdown

Most of those arrested in France are also Vietnamese, according to an investigation source.

The probe has discovered that the migrants who died were loaded onto the truck in northern France, and that the network continued its operations even after the tragedy, charging €15,000 to €20,000 to cross from France to Britain.

Even the coronavirus lockdown did not stop the gang's smuggling activities, the source said.

The tragedy shone a spotlight on the extraordinary dangers migrants are willing to risk to reach Britain, with some paying smugglers up to $40,000 for the perilous journey.

Post-mortem tests found the victims died from lack of oxygen and overheating, and one sent a poignant text message to her family in Vietnam as she lay dying in the truck.

The victims came from impoverished and remote corners of central Vietnam, a hotspot for people willing to embark on dangerous journeys in the hope of striking it rich abroad.

Many are smuggled illegally through Russia or China, often left owing huge sums to their traffickers and ending up working on cannabis farms or in nail salons.

The driver of the lorry, Maurice Robinson of Northern Ireland, last month pleaded guilty to manslaughter over the 39 deaths.

Four other men are on trial in London over the tragedy, while another man, Ronan Hughes, is facing extradition from Ireland to Britain on 39 counts of manslaughter and one of conspiracy to commit unlawful immigration.

Hughes is accused of organising and controlling the drivers in the trafficking operation.

The overall tone on migration has hardened in Europe since 2015-2016, when it took in over a million asylum-seekers, most of them Syrians fleeing the war in their country.

They said it was “high time” for a “comprehensive European… approach for all relevant migratory routes” to tackle irregular migration.

The letter called for “additional financial support” within the existing budget to enhance “relevant operational and technical measures for effective border control”.

Some member states are facing “levels of arrivals and applications equivalent to, or higher than, those seen during the migration crisis in 2015 and 2016,” the letter added.

At the end of January, European Commissioner for Home Affairs Ylva Johansson said she was confident that asylum reform — under discussion since September 2020 — would be adopted before the European elections in 2024.

The EU has earmarked six billion euros to protect its borders for the 2021-2027 period.

Several countries, including Austria, have called for EU funding to strengthen fences along the bloc’s external borders to reduce the flow of asylum-seekers.

But the commission has so far been reluctant, saying that “building walls and barbed wire” is not the right solution.

EU Commission chief Ursula von der Leyen said last month that member states could sign up to a pilot scheme over the first half of this year to speed up screening and asylum procedures for eligible migrants — and “immediate return” for those not deemed to qualify.

Von der Leyen said she wanted the EU to draw up a list of “safe countries of origin”, and for the bloc to strengthen border monitoring on the Mediterranean and Western Balkans routes migrants use to get to Europe.

CRIME
French police detain man who threatened to blow himself up on a train
Url copied to clipboard!