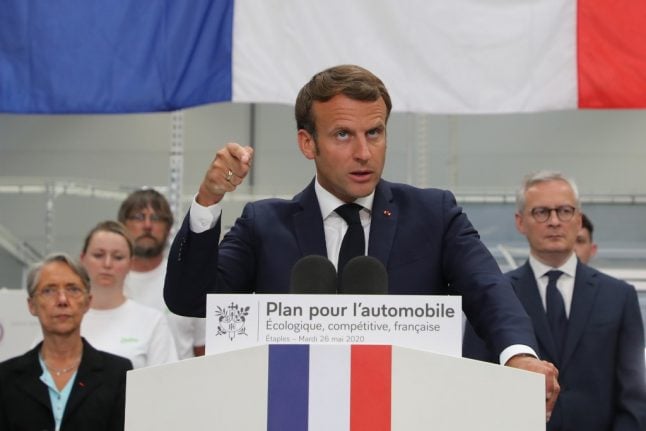 Emmanuel Macron at the car factory in Etaples. Photo: AFP

Macron said the package would include €1 billion in subsidies to encourage purchases of electric and hybrid cars and set a target of France producing a million green cars annually by 2025.

Visiting a car factory in Etaples in northern France, Macron said his government would seek to boost flagging customer demand with a subsidy of €7,000 for each individual buying an electric car, €5,000 for each company purchase, and €2,000 per hybrid rechargeable car.

Starting June 1st, there would also be an aid of €3,000 for converting from a petrol-fuelled car to a less-polluting one – and as much as €5,000 to upgrade to an electric vehicle, the president said.

He said that some three quarters of French people would be eligible for the incentives.

“In total, the state will provide a bit more than €8 billion in aid to the sector,” said Macron.

France, the home of Renault, Citroen and Peugeot, has seen car sales and revenue slashed by some 80 percent as a result of a two-month nationwide lockdown to curb the spread of the coronavirus, said Macron.

By the end of June, some half a million cars will have gone unsold.

“This has never been seen by this sector which represents close to 16 percent of the revenue of our industrial sector,” said the president. The president said the plan was aimed at “defending our industrial employment, which is going to be faced with one of the most serious crises in its history” and also protecting France's “industrial automobile sovereignty”.

“And it is also a plan for the future of the automobile in the 21st century,” he added.

The plan won a warm welcome from the head of the sector association Plateforme Automobile, Luc Chatel.

“This sets out a new ambition for the auto industry in France and responds to the gravity of the situation”, he told France Info radio.

“Excluding periods of war, we are going through the most serious crisis in the history of the auto sector,” he added.

Chatel applauded the plan for one million electric or hybrid cars annually by 2025 as “realistic”.

The French government is eager to use the crisis to push the industry in a greener direction and has made a €7 billion aid package for Air France conditional on a more environmentally-friendly strategy from the airline.

Macron also announced that embattled Renault had agreed to join a Franco-German project to produce electric batteries for the rechargeable auto industry.

Macron also linked the rescue deal for Renault to ensuring guarantees for the future of its staff at the plants in Maubeuge and Douai in northern France.

The automaker, in which the French state holds a 15 percent stake, is set to unveil this week a sweeping revamp of its operations as well as its partnership with Nissan and Mitsubishi.

Renault declined to comment on that report when contacted by AFP.

Even before the current crisis, it had been rocked by the departure of CEO Carlos Ghosn, who was arrested in Japan in November 2018 over allegations of financial misconduct, including under-reporting salary and misuse of company assets at Renault partner Nissan.

Brazilian-born Ghosn, who also has French and Lebanese nationality, is now in Lebanon, where he fled in December after jumping bail in Japan.