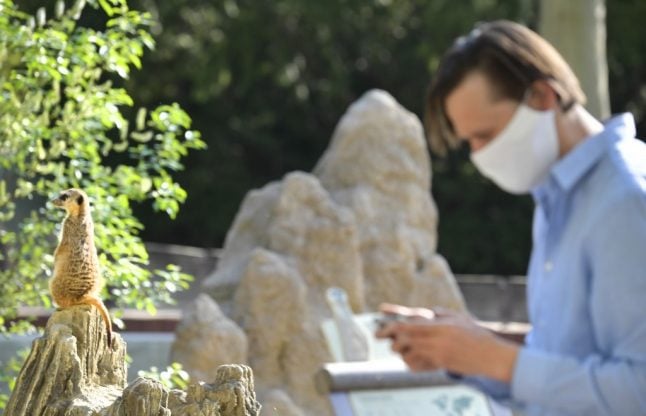 The app could be available in app stores from this weekend. Photo: AFP

Use of the app called StopCovid will be voluntary, and will keep track of users who had been in close proximity of one another over a two-week period.

If any become infected, they inform the platform, which alerts the others.

Privacy defenders have expressed fears that the app marks the first step towards a society under constant online surveillance.

READ ALSO What is France's coronavirus tracker and how does it work?

But the CNIL watchdog, which gave provisional approval for StopCovid in April, said on Tuesday that the app met the legal requirements for privacy protection, with ample safeguards to prevent abuse.

It nevertheless made a number of recommendations to make it even safer, including improving the quality of information provided to users, allowing users to object to information shared, and providing an option for erasing stored data.

The app will not rely on geolocation, but instead use Bluetooth technology which allows mobile phones to communicate with each other over short distances.

The French parliament, which must vote on the rolling out of the app, will debate the matter on Wednesday.

If it says yes, StopCovid could be available in app stores from this weekend.

France started reemerging on May 11th from a two-month lockdown to curb coronavirus spread. Public transport has resumed, though many people are still working from home and most schools have yet to reopen.

The issue of how to track coronavirus spread with mobile technology has sparked privacy concerns in several countries now lifting strict home confinement measures as they hope to kickstart their economies.

As a result of the lockdowns, few people in most countries have been exposed to the virus, and thus do not have immunity and remain at risk of infection, raising fears of a second wave once people start mixing again.

The European Commission has recommended that data harvested through contact-tracing apps be stored only on users' own phones and that it be encrypted.

Fellow Twitter users marvelled at the details on the picture purportedly taken by the telescope, which has thrilled the world with images of distant galaxies going back to the birth of the universe.

“This level of detail… A new world is revealed every day,” he gushed.

But in fact, as Klein later revealed, the picture was not of the intriguing star just over four light-years from the Sun but a far more modest slice of the lip-sizzling Spanish sausage chorizo.

“According to contemporary cosmology, no object belonging to Spanish charcuterie exists anywhere but on Earth,” he said.

Klein acknowledged that many users had not understood his joke which he said was simply aimed at encouraging us “to be wary of arguments from people in positions of authority as well as the spontaneous eloquence of certain images”.

However, at a time when battling fake news is of paramount importance for the scientific community, many Twitter users indicated they were unamused by Klein, director of research at France’s Atomic Energy Commission (CEA) and a radio show producer.

On Wednesday, he said sorry to those who were misled.

“I come to present my apologies to those who may have been shocked by my prank, which had nothing original about it,” he said, describing the post as a”scientist’s joke”.

He was shortly back on surer ground posting on Twitter an image of the famous Cartwheel Galaxy taken by the James Webb Space Telescope. This time, he assured users, the photo was real.