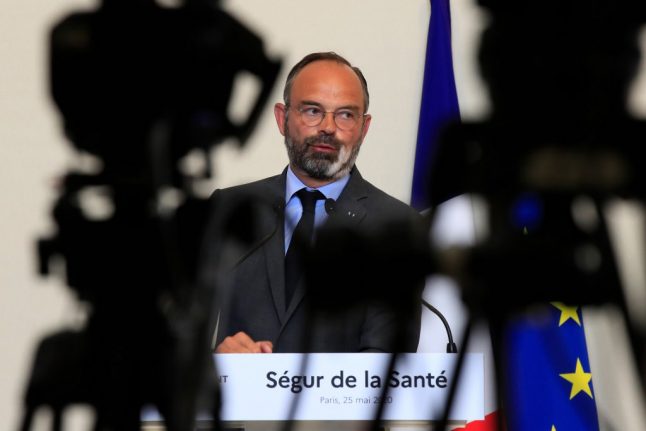 What will be reopening next week? French Prime Minister Edouard Philippe will reveal the government's plan today. Photo: AFP

At 5pm on Thursday, Prime Minister Edouard Philippe will lay out the plan for 'phase 2' of lifting the strict, nationwide lockdown that kept France confined for two months straight.

The announcement will come after scheduled talks with the advisory Scientific Council, set up specifically for the coronavirus epidemic.

Since the process to loosen lockdown restrictions began on May 11th, the government has repeated that all steps to follow will be taken progressively and always be dependent on the health situation.

They will be closely watching patient numbers and hospital admissions this week, which as the third week after lockdown began to be lifted will be crucial in determining whether looser restrictions will lead to a second surge in coronavirus cases.

READ ALSO When will we know whether lifting France's lockdown was a mistake?

One of the major decisions of the first phase of lifting lockdown on May 11th was to divide the country into red and green zones, depending on how widely the virus was circulating and how local hospitals and testing services were coping.

These designations will be revised from June 2nd, when it is hoped more areas of the country can be classified as green.

We don't know exactly how this will change the map, but several local officials have suggested that the second phase of the map will show only the greater Paris Île-de-France region in red. There is also a suggestion that a middle 'orange' category could be introduced.

At present the difference between red and green départements are fairly minimal – green areas have reopened parks and some secondary school classes, but other aspects of phase 2 such as reopening bars and restaurants could also depend on the colour map. Will the red zone shrink in the second version of this map? Map: Santé Publique France

There are a lot of decisions that still need to be taken on phase 2, with the government saying they will asses the health situation and take decisions 'at the end of May'.

All bars, restaurants and cafés remain closed, to the dismay of the hospitality industry which employs more than 1 million people in France.

When presenting the country's €18 billion rescue package for the tourist industry, Prime Minister Edouard Philippe said: “Reopening [of bars, cafés and restaurants] as of June 2nd can be envisaged in green départments, if the epidemic situation does not deteriorate.”

As things stand, that would mean Paris' cafés and bars staying closed.

If green zones get the go-ahead to reopen bars and restaurants, they will need to comply with strict health precautions, like spacing out tables and installing plexiglas to separate the barman from customers.

People in France are now allowed to travel freely – but only up to 100km from their homes. A trip of more than 100km as the crow flies requires an urgent reason and a permission form.

Various government ministers have made positive noises about being allowed to go on holiday within France this summer, with the transport minister Elisabeth Borne saying over the weekend: “From now on, you can book your holidays for the month of July, for the month of August.”

This suggests that the 100km rule will be lifted soon, but whether that will be in phase 2 or the following phase remains to be seen.

There have been suggestions that it could first be extended to 200km or 300km before being lifted entirely.

These are not expected to be addressed as part of phase 2. Travel into France is currently heavily restricted – essential trips only and an international travel certificate required – and these regulations are expected to stay in place until at least June 15th.

Several European countries have already committed to reopening their borders on June 15th, but France has been a little more cautious and says only that restrictions will be reviewed, although foreign minister Jean-Yves Le Drian says he hopes there can be a 'generalised easing' on travel from within Europe from that date.

When French ministers talk about summer holidays for the French, they are at this stage referring to people already in France going to a different part of France. Reopening of schools began in phase 1 from May 11th, but it was a very gradual process with strict limits on class size. As things stand at present, infant and primary schools (maternelle, élementaire and primaire) have reopened, but with a strict class size limit of 15 pupils. Nurseries (crèches) have also reopened with a 10 class size limit.

Secondary schools (collèges) have reopened only in green zones.

A decision will be taken at the end of May on whether high schools (lycées) can reopen and whether to revise any of the current limits on other school types. At present it is voluntary for parents to send their children back to school as they reopen.

At present cinemas and theatres remain closed and only gathering of 10 people or more are allowed in public places (although there is no limit on gatherings in private residences). These restrictions may be lifted from June 2nd or they may stay in place.

Fears of crowding have lead to several local authorities in popular visitor spots taking extra measures such as closing beaches and hiking trails to deter large numbers of visitors.

A lot of people have already gone back to work, but people who can work from home are asked to continue to do so.

This guidance may be relaxed in phase 2 but large cities and/or areas with a high virus concentration such as Paris may well retain the guidance in order to ease crowding on public transport.

These are not expected to be included in phase 2 and Prime Minister Edouard Philippe has already said they are unlikely to be allowed before September. Sports such as rugby and football have already ended their 2019/20 seasons and are expecting to restart in September.