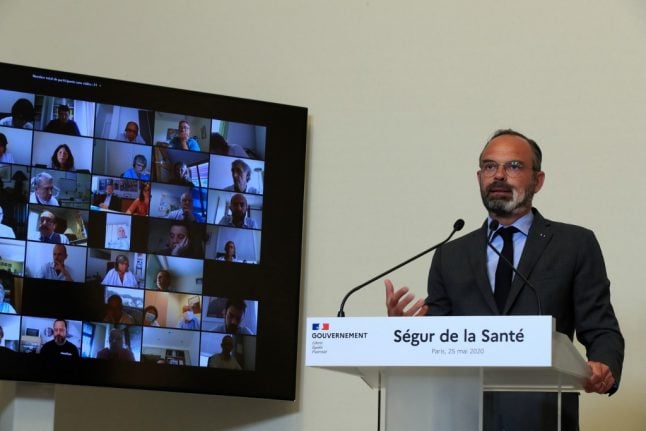 PM Edouard Philippe was joined by 300 representatives from the health sector who participated online. Photo: AFP

“The coronavirus has required not that we change the course, but that we change the pace,” said Philippe as he opened what will be nearly two months of intense talks between the government and the health sector to thrash out a plan for the future of French hospitals.

Flanked by the health minister and 300 health sector representatives participating online, Philippe acknowledged that the government had been subject to “a lot of criticism” for how it had steered the country's hospital system in the years leading up to the coronavirus health crisis.
BACKGROUND: Why France is planning a massive overhaul of its healthcare system
Philippe said that, although the crisis had “revealed” and “accelerated” processes that needed to be done, the hospital system had done the job during the height of the epidemic.
“The French system was remarkable. It held,” he said, referring to the rapid transformation of hospitals in hot-spots as well as a mass-transportation of patients between regions.
“It did not happen easily, (..) but it happened,” he said.
Among the most pressing topics to be discussed during the what has been dubbed Ségur de la santé – the name of the process has been taken from the avenue de Ségur, the street in Paris where the health ministry is located – are nurses' salaries, working conditions and general organisation of healthcare services in cities and rural areas.
Laying out the government's designed pillars to create a “more robust, more just, and more efficient” health sector, the PM confirmed that nurses would see their salaries increased after this period.
“The raise will be significant,” he said.
READ MORE: How do nurses' salaries in France compare to the rest of Europe?
He also reiterated the government's promise rethink the current investment plan and render the the system “more flexible.”
This last point included a reviewing of the 35-hour week, which could well be a major bone of contention with medical unions.
The PM also said new technology would play a crucial role in the future of French healthcare, pointing to the new practice of télémédecine (online medical consultations) as one example.
“We need to remove obstacles to health system reform,” he said, adding that they in the coming weeks had to see under what circumstances practices such as télémédecine could continue.
The health sector reform had to be accompanied by a broader, structural remapping of medical services in different areas, the PM said.
Emphasising “prevention” as a key-word, the PM said the coronavirus also had laid bare broader inequalities that the country would have to address.
“It’s easy to say all of this, it’s harder to do in practice,” he said.
“To achieve it, we need to be collectively intelligent.”

The results of the Ségur de la santé will be part of a new social security law that will be presented to the parliament this autumn.