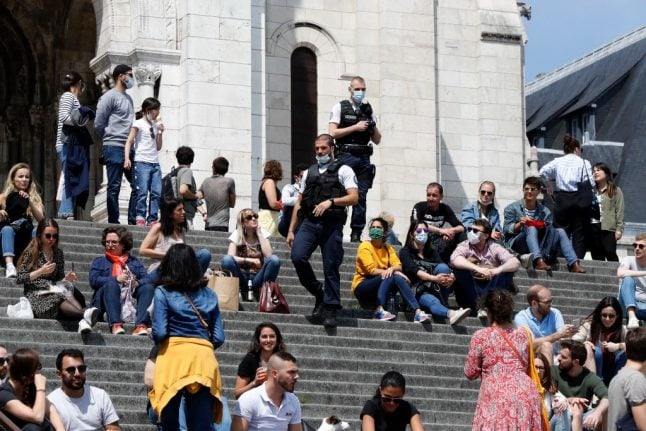 Police moving on crowds on the steps of Sacre-Coeur in Paris. Photo: AFP

It was a couple of days before life started to look something  like normal – perhaps too normal.

There were reports on Sunday of crowds on beaches or river-banks all over France. In my tiny village in Normandy, I saw three large groups of walkers pass my house – three more than on a pre-virus Sunday.

Confusing and contradictory figures exist but it appears to take three to five days – and up to 14 days – for the first symptoms of Covid-19 appear.

READ ALSO What changes in France under phase 1 of lifting lockdown? Health minister Olivier Véran has been forced to admit that the contact tracing app is not ready. Photo: AFP

Dr Jacques Basstoni, a GP in Calvados who is president of MG France, the largest union of family doctors, says : “We won’t know what impact the end of lockdown  has had before May 20th or 21st”.

In other words we may have some idea whether France is heading for a second wave of infections by Wednesday or Thursday. Other scientists and doctors say that a clear picture will not emerge until next week.

The key early indicators to look out for will be “confirmed cases” and “hospital admissions”, both of which have been radically reduced from their late March and early April peak.

The national health agency, Santé Publique France, says that only 2,950 new SARS-CoV-2 cases were reported by GPs in the seven days before the lockdown ended on Monday, May 11th. This compares with 94,810 cases at the peak – the seven days up to March 29th.

There have been 25 new family or workplace “clusters” of cases identified in the first week of déconfinement but these were all incubated during the eight weeks of widespread house arrest.

Overall, the number of new cases in recent days – despite a long overdue but incomplete increase in testing – has been well below the government’s target or ceiling of 1,000 to 3,000. From Saturday at 2pm to Sunday at 2pm, there were only 120 new cases reported in the whole of France.

Despite some glitches, the gradual easing of the lockdown has gone well (so far as we know until the infection figures appear post-Wednesday). The best measure of that success is the comparative absence of barracking and fault-finding by opposition politicians.

Emergency social-distancing measures on public transport in Paris and other big cities have been reasonably effective. The Metro is operating at 75 percent or normal. All those who want to wear masks appear to be able to find them. The country’ s economy, brutally cut  by one third from March 17th, is cranking slowly back into life.

There are some continuing failures. The health minister, Oliver Véran, boasted last Friday that testing was now running at “more than 50,000 a day”. The government had promised 100,000 a day.

The policy of “test, trace and isolate contacts” is supposed to be at the heart of the government’’s “deconfinement” strategy. By Dr Véran’s own admission it is still only operating at half-cock.

Some time early next week, the government will decide whether, and where, to go ahead with the second phase of the lockdown easing from June 2nd-3rd.

The distinction between “Red” France and “Green” France – the départements where the virus is active and those where it has retreated or never really appeared – will then become more real and painful.

READ ALSO What does it mean to live in a 'red zone' in France? Will the map change? Probably a little. Parts of Burgundy, Franche-Comté, and northern France, now in the red zone, may turn green.

I fear that it will be too early for the greater Paris area and for Alsace and other parts of the east, which have seen around three quarters of all French cases and deaths.

Much of the science remains uncertain. Only opposition politicians and the many loudmouths of social media are absolutely certain how Covid-19 works and how to defeat it.

Professor Didier Raoult in Marseille, the promoter of the hydroxychloroquine “cure”, is convinced that there will be no second wave. He has been wrong about several things since the epidemic began. He is undoubtedly a brilliant man. Maybe he is finally right about something. Professor Didier Raoult – will be be proved right on epidemic curves if not on hydroxychloroquine? Photo: AFP

Raoult says that all epidemics of this kind burn themselves out, whatever we do, or don’t do, to control them.

It is striking, when you look at the French statistics that Covid-19 deaths peaked in the last couple of days of March and the first five days of April. This is roughly two to three weeks from when the lockdown began – suggesting that the eight weeks of house arrest did serve its purpose.

As Professor Raoult points out, however, exactly the same pattern of peak and fall can be traced in other epidemics, like the great flu epidemic which killed 31,000 people in France in the winter of 1969-70. (The present French death toll from Covid 19 is just over 28,000, not including “home deaths”.) There was no social distancing or lockdown in France in 1969-1970. In fact, the epidemic was scarcely mentioned in the press at the time. It still went  away with the spring and early summer.

We will know in the next few days whether a) Professor Raoult is right  b) whether the government has judged its déconfinement well.

If the number of Covid-19 cases, and serious cases, begins to soar again, we will know they were both wrong.