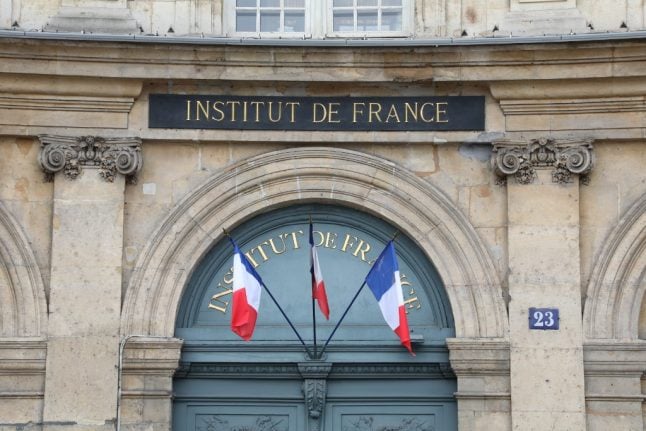 There's a lot of research that still needs to be done on the novel coronavirus Covid-19 but one thing that we do know is its gender – at least in French.

The news that French language guardians Academie française had ruled that it is la Covid-19 (but le coronavirus) made headlines around the world and earned an appearance for The Local France's story on The Late Show with Stephen Colbert and formed the basis of a joke about Donald Trump (We should have known Covid-19 is female. That explains why Trump doesn't take her seriously.)

But the fact that France even has an official group whose job it is to decide these things also provoked surprise and some amusement among foreign observers.

So here's what you need to know about the Academie française. If you have strong views of the gender of viruses, unfortunately you cannot just rock up and ask to join – members must be invited to join and then elected by their peers.

There are only ever 40 members at one time and people must be judged to have made a contribution to the French language – the membership list is heavy on novelists, poets, playwrights and literary critics, but also includes philosophers, historians, statesman and religious leaders.

You don't need to be French to be a member, however, there are British, Italian and Canadian members.

Not really, although membership is for life, but they are known as 'the Immortals'.

The nickname refers to the device on their motto à l’immortalité (to immortality) which actually refers to the French language itself, not the individual members of the Academie. As befits an organisation set up by Cardinal Richelieu in 1635 and given letters patent by Louis XIII the Academie has a lot of tradition behind it.

These are not intended to skewer unwary foreigners who mix up their le and la, however, it's a reference to the might of language – although for women and clergymen the wearing of the sword is optional.

4. They are not keen on English

The Academie's mission, as stated in its charter from Louis XIII, is to give the French language rules that will keep it pure, eloquent and capable of dealing with the arts and sciences.

But in recent years they have become increasingly concerned about English, specifically the widespread importing of certain English words into everyday use in France.

As well as coming up with French alternatives for English terms, the Academie released a warning in 2019 saying that the French language was being “repeatedly violated” by an “invasion of Anglo-Saxon terms”.

It warned: “If they do not react vigorously and if public opinion does not take into account the extent of the danger that we are facing, French will then cease to be the living and popular language that we love.”

5. A lot of people ignore them

Despite their dire warnings about the use of English terms it's actually pretty common to hear French people – especially younger ones – toss the odd word of English into everyday chat and you will frequently hear a c'est cool or le buzz if you loiter around young French people for long enough.

The Academie has also made a concerted effort to push back against the many English tech-related words that have flooded the language, and here again they have been largely unsuccessful.

Probably the most notorious example is the time they tried to replace the simple and catchy le wifi with l'access sans fil à internet (wireless access to the internet).

And if you want to know how that caught on, try asking a French person Avez-vous le code pour l'access sans fil à internet and see if that gets you the wifi password.

Attempts to replace hashtag with mot-dièse, smartphone with mobile multifonction and binge drinking with beuverie express have all been similarly unsuccessful.

The below very funny Twitter thread is a reaction to the Academie attempting to come up with a French translation for a Twitter “follower” and sees the author ask for parody French translations of other web/tech related terms.