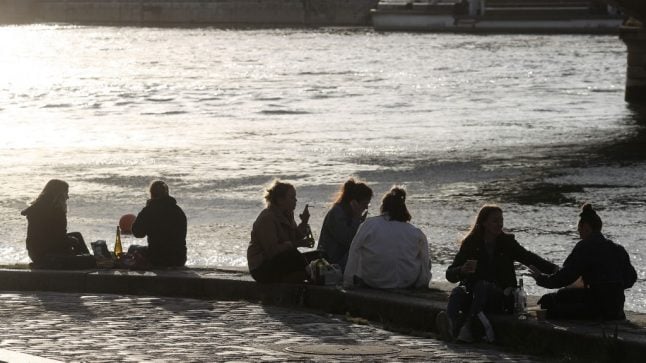 If you're in public, there is a 10-person limit. Photo: AFP

As France moves into phase 1 of the loosening of its lockdown rules – a phase which lasts until June 2nd – people are freer to be out and about and that includes socialising and visiting family.

READ ALSO What changes in France under phase 1 of lifting lockdown?

But there are still some rules to follow and, especially in cities, police are enforcing them strictly.

If you are socialising in a public place, you must be in a group of 10 people or fewer.

And even if you go out in a group of less than 10, you need to be aware of how many people are around you – in Paris police have broken up gatherings on the banks of the Seine and the Canal Saint-Martin and the steps of the Sacre Coeur cathedral after concerns that there were too many people in the same space.

Area around the Sacré-Cœur – second most visited monument in Paris (you know what the first is) – has been evacuated by police tonight because of crowds building up. Lack of social distancing since easing of Coronavrius lockdown restrictions on Monday causing concern in the city.

As a result, alcohol is now banned on all the city's river and canal banks.

However, if you are in your own home, the 10-person upper limit does not apply.

This is a last-minute change. The rules as first announced limited all gatherings, public or private, to 10 people but the Constitutional Court's full text adds a clarification that the limit cannot be imposed on private gatherings in residential premises.

The interior ministry cautioned the French must still demonstrate their “civic responsibility” and apply caution and strict hygiene measures to all a gatherings.

“Hygienic measures must be applied everywhere and under any circumstances, also in the private sphere,” the ministry told Le Parisien.

But technically there is no upper limit, so great news if you live in a chateau and want to host a ball, not so great if you live in the kind of Paris apartment where cat-swinging would not be a viable hobby.

The other exception to the 10-person rule is funerals, which can now have a maximum of 20 people at the service.

The after-funeral wake counts as a social gathering, so if it is in a private home there is now theoretically no upper limit on guest numbers.

But there is a cautionary tale from Dordogne which now has a coronavirus cluster centred around a funeral where dozens of people turned up at the wake.

The cluster was one of five new ones in France reported over the past week. Cafés and bars will stay closed until at least the end of the month. Photo: AFP

These all remain closed, so for the moment all socialising must take place either in the home or outside. The government says a decision will be taken at the end of May on when they can go back in business, and there are likely to be strict social distancing measures in place for those that do reopen.

However an increasing number of restaurants are now offerings takeaways, so it is still possible to sample someone else's cooking if you're bored of your own culinary efforts.

You can now travel to meet friends and family members, as long as they live closer than 100km to you. If you're travelling more than 100km you will need a permission form and an urgent reason – which can include giving essential care to a child or sick relative but does not include family visits.

As the weather improves a picnic in the park sounds like a nice option, but whether this is possible depends on where you live. Parks and gardens are now open in the green zones, but not in red areas.

MAP: Red and green départements for easing of France's lockdown

The government and the Mayor of Paris are in something of a standoff over the issue of parks, which are still closed in the city as it is a red zone. However mayor Anne Hidalgo argues that reopening the parks would help people spread out in a densely-populated city and avoid close gatherings such as those seen at the Canal Saint-Martin.

However if you're yearning for the great outdoors forests are now open and driving out to the countryside for a walk is allowed under the new rules as long as you don't travel more than 100km.

If you're looking for a day trip some smaller museums, chateaux and tourist sites are now either open or about to reopen – here is an interactive map of which ones are open to visitors.

As the rules loosen we're still being encouraged by the government to be cautious and people aged over 65 or in vulnerable groups are advised – although not ordered – to continue with the principles of self isolation.

And at least the rules in France are not as confusing as in the UK where – if we have understood this correctly – you can see family members only if you employ them as a cleaner. Or something.