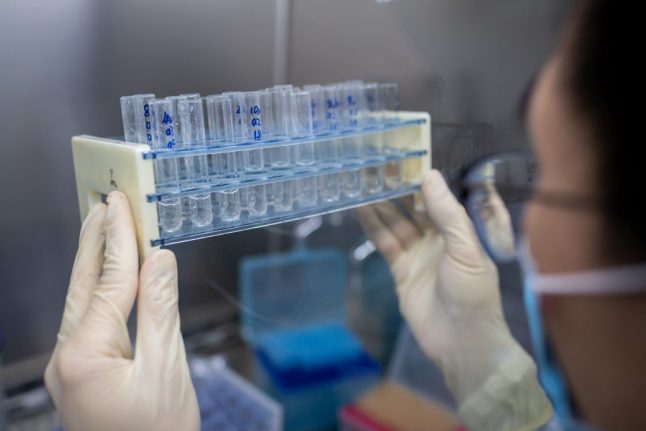 Researchers in several countries are racing to develop a coronavirus vaccine. Photo: AFP

“To us, it would be unacceptable for there to be privileged access for such and such country for financial reasons,” deputy finance minister Agnes Pannier-Runacher told Sud Radio.

The French government official reacted to Sanofi's British CEO Paul Hudson statement on Wednesday that if its efforts to find a vaccine pan out, he would supply the US government first because “it's invested in taking the risk,” after it expanded a partnership with his company earlier this year.

“That's how it will be because they've invested to try and protect their population, to restart their economy,” he told Bloomberg News.

But Hudson's comments drew outrage from French health associations, not least since Sanofi has benefited from tens of millions of euros in research credits from the French state in recent years.

Pannier-Runacher said she had immediately contacted the group after the comments from Hudson, a British citizen who took over as Sanofi's chief last year.

“The head of Sanofi's French division confirmed to me that a vaccine would be available in every country and obviously (..) to the French as well, not least because it has production capacity in France,” she said.

France's higher education minister, Frederique Vidal, said Sanofi's plan to give the United States priority access would be “incomprehensible and disgraceful” since a successful vaccine must be “a public good for the world.”

President Emmanuel Macron's office said it would hold talks with Sanofi executives at the Elysee Palace early next week, insisting that any vaccine must be considered “a global public good, which is not submitted to market forces.”

'Will be accessible to all'

After the French government's reactions, Sanofi promised that any coronavirus vaccination would be “accessible to all” – if the EU proved “as efficient” as the US.

“It is evident that if Sanofi discovers a medicine or a vaccination that is efficient in treating the coronavirus, this will be accessible to all,” said President of Sanofi France, Olivier Bogillot, to BFMTV on Wednesday.

“It is true that we began out work with the US government very quickly,” he said, adding that the “US government had mobilised (financially) very early on.”

The US had funded Sanofi with “several €100 million” to fund their research on the coronavirus, Bogillot said.

“The EU must be equally efficient to help us rapidly put in place this vaccination.”

In April, Sanofi joined with Britain's GlaxoSmithKline to work on a virus, though trials have not even started, and any successful treatment would be available toward the end of next year at the earliest.

Their project is being funded in part by the Biomedical Advanced Research and Development Authority (BARDA) of the US Department of Health and Human Services.

It is one of dozens of vaccine projects underway to combat the coronavirus outbreak that originated in China last December.

This month, the European Union spearheaded a global effort to raise about $8 billion (€7,4 billion) for research on coronavirus vaccines, treatment and testing, a move welcomed by the World Health Organization (WHO).

But Washington pointedly refused to participate, potentially undermining the effort.

US President Donald Trump has announced he would slash funding to the WHO, which he accused of acting too late on the COVID-19 threat and of mishandling efforts to stem the outbreak.

Trump also said this month: “We are very confident that we're going to have a vaccine (..) by the end of the year,” a prediction that few health experts consider likely.