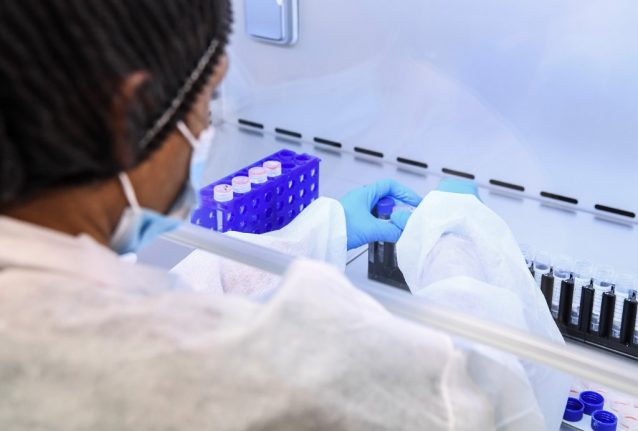 “We need to remember that the virus is here, circulating, ready for an ambush,” virologist Anne-Claude Crémieux told France Info.

The new clusters were discovered just before May 11th, the day France began to ease its strict, nationwide lockdown.

Local authorities in the cluster areas have had their hands full to successfully track and test those at risk of having been contaminated.

All the clusters were found in so-called green zones.

Before the lockdown, France divided the country into red and green zones, with slightly looser restrictions in the green zones, due to their low rates of coronavirus infection and pressure on local hospital.

Four regions are in red – Île-de-France, Grand-Est, Hauts-de-France and Bourgogne-Franche-Comté – and one département, the overseas territory of Mayotte.
READ MORE: This is France's map of red and green départements for easing restrictions This map shows how the country was divided into green and red départements, as of May 7th. Source: French Health Ministry

The green départements have an estimated circulation of the coronavirus of six percent or less. But the estimates are based on the number of people that got tested in a hospital and the real contamination level is likely higher.

READ MORE: What is the difference between a red and green département?

Green areas had to be particularly aware of the possibility of invisible, unregistered cases, Crémieux stressed.

“We know that more than half of the people infected have few or no symptoms, so the transmission chains are practically invisible,” she said.

This was the case for a vast majority of the people that tested positive in the new clusters, as detailed below. This map shows the estimated coronavirus circulation in each département, as of May 7th. Source: French Health Ministry

Where are the clusters?

Three of the clusters are in the southwestern middle of France, in the départements Dordogne and Vienne and Vendée.

A fourth was discovered in Clamart, in the Hauts-de-Seine département, less than 10 km from Paris, which is a hard-hit red zone.

A fifth, newest cluster is located in Tarn, a southern département in the Occitanie region.

What do we know about them?

The cluster in Dordogne was discovered when a man tested positive for the virus six days after he had been to the funeral in the neighbourhood village (the cause of death was not the coronavirus).

The regional health authorities of Nouvelle-Aquitaine traced and tested 150 people that had been in contact with the man or who had been close to the funeral premises.

Of the total tests carried out, nine – eight in the same family – turned out positive.

The people testing positive showed few or no symptoms at the time.

This cluster was detected after a staff at a secondary school (collège) tested positive for the virus the week following a staff meeting at the premises.

Local authorities tracked and tested all of the people who had been in contact with the first case and who could have gotten the virus.
Three tests came back positive.
The authorities then broadened out the group that needed to be tested to include people close to the new positives. Sixty tests out of 74 have so far come back negative.
Vendée

The cluster in Vendée originated in a slaughterhouse.

After several employees tested positive for the coronavirus, local authorities organised testing all of the people working on the premises.

Of the 261 tests taken on Saturday, four came back positive – all of them cases where the person carrying the virus did not so far present any symptoms, according to France Bleu.

The authorities ramped up the testing to include people that could have been contaminated by these four cases.

About 700 people will be tested in total.

Less than a week before the easing of lockdown on May 11th, Hauts-de-Seine – a Parisian suburb – was coloured red on the government's map.

Now a green département, local authorities hit a bump in the road after a cluster was detected in the town of Clamart.

According to French Daily Le Parisien, it originated when a man whose housemate had the virus moved into a foyer for young working men.

He had no symptoms and was cleared by his doctor before the move. But, three days later, he got the first symptoms.

His test came back positive and authorities are currently testing all of the other men in the foyer. Seven out of 20 people tested have so far been confirmed as carrying the virus.

The total number could turn out to be higher as 21 test results have not come back yet. None of the people who tested positive showed any symptoms so far.

On Monday, local authorities in Tarn tested 175 after one person – a nursery (maternelle) teacher – tested positive for the virus.

Of the 35 first tests in a first round, three came back positive, which had health authorities expand the testing range.

'Did not respect health rules'
In two clusters – the funeral in Dordogne and the foyer in Hauts-de-Seine – the people concerned had not respected the official health rules, according to authorities.
In the latter case, their doctor told France Info that: “When we told them, they thought it was a joke because they did feel tired or have any aches.”
As for the funeral, they had been 20 people as required for the ceremony, but many more people had shown up for the wake.
The prefect of Dordogne told France Info that “this really illustrate exactly what we don't want to experience in the coming three weeks.”
“Relaxation, family meetings, children, grandchildren, grandparents, neighbours.. People gathering in groups of 30 and, as it happens, one person contaminates a big number of people requiring us to mobilise a lot of people (to sort it out),” he said.