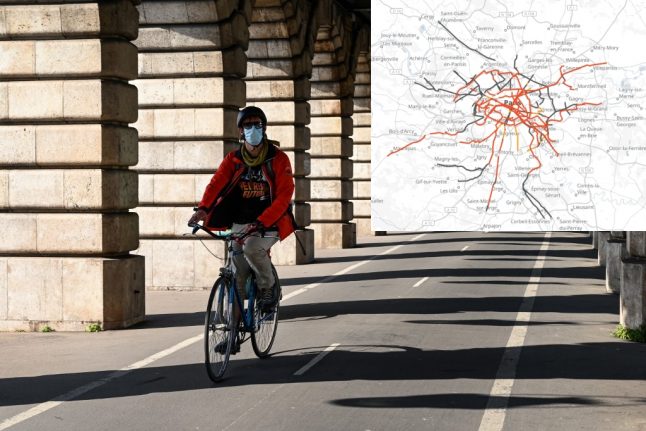 As the French capital emerges from 55 days of lockdown and slowly moves towards a return to normality, one of the biggest concerns for city authorities is how they can limit crowds on public transport, especially during peak travel times.

There are already measures in place since May 11th such as a permission form being required for travel during rush hour, the mandatory use of face masks on all public transport and social distancing signs plastered everywhere.

But the risk of human error and infection still remains in the city with most Metro stations in Europe and where 1.53 billion Metro journeys were made in 2017.

READ ALSO Paris public transport – what is running and what are the rules?

Paris City Hall has therefore decided its next goal should be to get Parisians on their bikes and off public transport with an ambitious bike plan that will add 50km of cycle paths in the city centre and 100km in the suburbs.

“All of those who can use a bike should do so,” Paris mayor Anne Hidalgo told BFM TV as she put the brakes on her bike and stopped for a quick interview.

Major Paris roads will be included in the scheme, some of which have already been equipped with cycle lanes and others that are due to be as the Vélo Île-de-France collective formalises the network.

These include Boulevard Saint-Michel and Rue Saint-Jacques, Avenue du Général Leclerc, the Etoile tunnel and Rue Saint-Antoine. Cycle paths will also be laid out along metro lines 1, 4 and 13. Some roads such as Paris’s emblematic Rue de Rivoli will be reserved for pedestrians and bikes, with only authorised vehicles allowed to drive there.

Park-and-ride car parks have been made available at several entrances to Paris.

The map embedded in the tweet below shows the time it takes on different cycle paths throughout Paris.