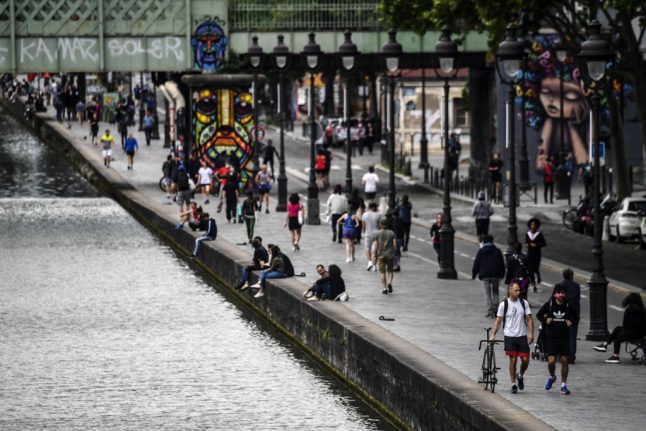 Rules of France's lockdown have now been relaxed. Photos: AFP

It’s the niggling worry at the back of many people’s minds in France and elsewhere in the world as countries begin their return to the ‘new normal’. Could there be another spike in Covid-19 cases this year, and if so, would it mean returning to full lockdown?

It's a scenario that has definitely been on the government's mind, and along with the plan to ease lockdown, there is also a plan to reconfine the country should cases spike again.

According to a study published by France-based consulting company Public Health Expertise on Wednesday, in the absence of reinforced protection measures for vulnerable people, France’s intensive care units will again be stretched by late July.

This disheartening scenario would present itself even if social distancing and the generalised used of face masks were still in place in the months to come, the study’s authors argue.

If this situation were to occur, Public Health Expertise contends that there would be a return to strict confinement measures – a second lockdown that would paralyse life in France once again.

To avoid such a situation, the group specialising in health economics in France suggests people over the age of 65 and others considered to be at high risk “limit their contact as well as their outings until the end of the year”.

This echoes government advice which stopped short of continuing to impose lockdown rules on vulnerable groups, but has advised that they keep to self-isolation, particularly in badly affected areas such as Paris. People in vulnerable groups such as the elderly are advised to stick to self-isolation rules. Photo: AFP

Another study by France’s National Health and Medical Research Institute (Inserm) together with Sorbonne University corroborates that a new outbreak of Covid-19 in France is probable, and that this second wave would be “more intense than the first”.

According to their findings, maintaining social distancing measures with half of the population at home, a 75 percent reduction in contact with vulnerable people and a reopening of less than half of all activities and businesses would be some of the ways of sidestepping this.

Other critical steps to take according to Inserm and Sorbonne University epidemiologists
include increasing the rate of testing and detection to at least 50 percent of new infections as well as not reopening middle and high schools until June 8th, and when doing so welcoming students back gradually and eventually splitting classes to half the number of pupils.

“If only 25 percent of cases are identified, we could face a second wave more intense than the first, starting at the end of June with ICU numbers exceeded until August”, Vittoria Colizza, co-author of the study, told French national daily Le Monde.

As of May 7th, 25,809 people are confirmed to have died from the virus in hospitals and nursing homes in France.

With the easing of lockdown restrictions just days away, the downward trend in fatalities and steep drop in Covid-19 hospital patients will act as a source of reassurance for many.

“It looks like the storm is going away, but we know it’s just circulating around us,” Paris nurse Xavier told Le Parisien.

“We will rest when everything is really over,” he adds with wariness of what will happen when Phase 2 starts.

The issue of crowded public transport is also on French officials’ minds with regard to a new spike in infections.

“It’s the most worrying matter,” Jean Castex, national coordinator for the deconfinement strategy, told the French senate on Wednesday.

“The key word is ‘gradual’, he stated, adding that the option of employees being able to work from home or with flexible schedules will be key to avoiding situations where commuters can’t abide by social distancing, especially in “very large communities and in particular in Ile-de-France”. Jean Castex, the man who wrote the plans to release lockdown and to reimpose it if necessary. Photo: AFP

“The behaviour of our fellow citizens is essential to success, to our victory against this pandemic one day.

“I’ve noticed a little relaxation and it’s not good because if it continues during the easing of lockdown, if we do not respect the social distancing measures, we risk relapse.”

“The point is that if the machine reboots, should everything restart on May 11th? No.”

There’s also the matter of immunisation to consider, especially while the global scientific community remains uncertain as to whether people who’ve had Covid-19 are no longer at risk of relapsing.

South Korean health authorities recently brought such concerns to the table after dozens of patients who had recovered from the illness later tested positive again, with some of the latest reports suggesting they were false positives.

France’s Institut Pasteur – a leading international body in the field of micro-organisms, diseases and vaccines – recently reported that by the end of lockdown in France on May 11th only 6 percent of French people would be immunised.

The rate required for herd immunity, which would theoretically make the virus disappear of its own accord, is 70 percent.

France’s government has already announced however that the “herd immunity strategy” isn’t an option that’s being considered, betting instead on social distancing and other preventative barriers to beat the virus.

Researchers said in a statement that “significant efforts must be maintained beyond May 11th to avoid a renewal of the epidemic”.

The overall consensus in France’s scientific community doesn’t appear to be the most optimistic, although most of their rhetoric is cautionary rather than catastrophic.

Perhaps one of the most encouraging viewpoints in France regarding this possible resurgence is that of virologist Anne Goffard, who told France Inter on May 3rd that the virus no longer constitutes a major collective threat in France currently, but that the danger has not been erased completely.

“To see the virus circulating in the French population, we will have to wait several weeks, even months,” Goffard said, adding that recent studies suggested that the spread of the coronavirus was going to generate “probably” a second wave “no earlier than the end of August”, or “later in autumn, in October or November”.