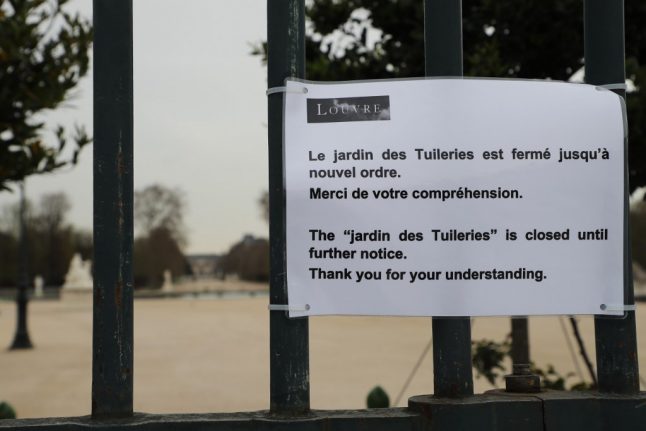 Mayor Anne Hidalgo said on Twitter she had renewed a request to open parks and gardens closed since mid-March, “taking into account the needs of Parisians, because Paris is a very dense city”.

Access would be conditional on everyone wearing a face mask, which the mayor said should also become compulsory on the streets of Paris.

Her request came a day after some Parisians were seen gathering in public spaces laughing, hugging and sharing meals despite the government urging people to maintain social distancing to limit the spread of the virus.

On the banks of the Canal Saint-Martin, police had to intervene to break up groups of people violating the rules – prompting a ban on alcohol on all of the city's riverbanks and canal banks.

France started cautiously lifting a strict two-month lockdown on Monday, but remains on high alert with heightened precautions in place in so-called “red zones” of the country – including Paris and the wider Ile-de-France region – where the virus remains active. These measures include keeping cafés, restaurants, bars, many schools, parks and gardens shuttered, and a ban on gatherings of more than 10 people.

Masks are compulsory on public transport nationwide, and for teachers, but not in other public spaces.

“No, we will not open parks and gardens in Paris and in Ile-de-France, nor in the other regions classified as red” zones, the minister said.

“It can be all to tempting with the sun out, for people to gather in groups that are too large… and to not respect the social-distancing measures,” he said.

France has recorded over 26,000 deaths due to the coronavirus outbreak so far, with 263 new fatalities reported Monday.

And the country fears a second infection wave as businesses start reopening and people return to work.

READ ALSO How likely is a second wave of coronavirus cases in France?

The civil servant in charge of the plan for easing measures, Jean Castex, warned on Monday that “the French population remains vulnerable to a resumption of the epidemic.”

Some primary schools and day care centres in France reopened for the first time in weeks on Tuesday, and public transport was reinforced after reports of crowding on some metro and bus lines the previous day.

The government, meanwhile, has given the green light for municipal councils to meet for the first time and designate their mayors following March elections that were marked by record abstentions over coronavirus fears.