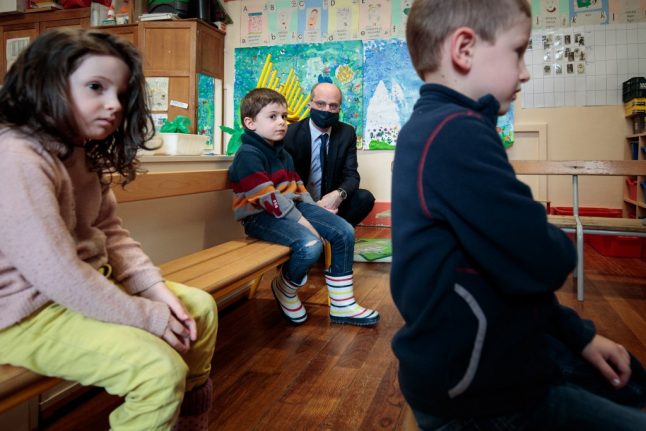 With masks, social distancing and temperature controls in place, schools in France began on Tuesday to reopen their doors, but the great majority of pupils in France are still learning at home.

France closed all of its schools on March 16th, the day before the country's general lockdown, although schools in coronavirus cluster zones had closed earlier than that.

Now as France moves into phase 1 of the lifting of its lockdown, schools are reopening, but only for a limited number of children.

Pupils return to nursery and primary schools around France today (Paris on Thursday) albeit in small numbers. Example: My kids' school 23 out of 125 (Parents of 60 kids applied, many choosing not to send kids back) Pupils not in every day.Priority given to children of key workers pic.twitter.com/vKzaVcQpUl

Some parents have already been told that their children won't return to school until the start of the new school year in September as schools operate a phased return.

The return is also voluntary, with parents allowed to keep their children at home as long as they commit to home schooling them.

Might have got over-excited by the French déconfinement. No return to school for my eldest (last year primary school) this academic year. No nursery til June earliest for the little one. Waiting on news for the middle child. Not optimistic about latter two.

France began to lift its lockdown on Monday, May 11th, which was a preparation day for teachers, and then some classrooms reopened on May 12th.

The school return is a phased one and from May 11th only primary and infant schools can reopen.

Secondary schools (collèges) can begin to reopen from May 18th and only in green zones – where the virus is less prevalent.

Post-16 colleges and technical colleges (lycées) won't be able to reopen until at least the end of May, with a final date not decided, and universities cannot restart in-person teaching until the summer.

Nurseries (crèches) can reopen from May 11th, but with classes of 10 or fewer.

Classes are limited to 15 pupils only (or 10 in nurseries) and in schools where more than 15 children per class want to return (or their parents want them to return) priority is given to the children of essential workers and vulnerable or at-risk children.

Not in all areas

The final decision on whether schools can reopen lies with local authorities, who can alter the timetable or the rules around school returns to suit local conditions.

In Paris the return to school has been set for Thursday (although crèches opened from Tuesday) while several local authorities in the Paris suburbs have also altered or delayed the return date over safety fears.

As mentioned above schools in the red zones – which includes Paris and most of north east France – will keep their secondary schools closed for now.

In order to keep the classes to a maximum of 15, some schools are also alternating days for different classes.

Schools are also bringing in a raft of safety measures to try and prevent the spread of the virus. Health data shows that children generally don't seem to be particularly badly affected by coronavirus – although the jury is still out on why that is – but they can spread the illness to other pupils and their families.

Masks will be compulsory for pupils in secondary schools but not primary or infant schools and all teachers and other school staff will have to wear masks.

Priority also given to vulnerable children and those whose parents playing a key role in fight against Covid-19. Strict sanitary rules in place: parents not allowed in school, Kids' temperature taken each morning (can't be above 37.8C) Drop offs, pick ups staggered, hands washed!

Hand sanistiser gel is available and schools are busy redesigning classrooms to ensure that social distancing is respected.

Some schools are also operating temperature testing of pupils.

As mentioned above, parents will not be compelled to send their children back if they are worried about health risks, although they will have to commit to continuing to home school.

Teachers who have health vulnerabilities can continue to work from home.

Schools in France will break up on July 4th, with speculation that the long summer holiday could be scrapped by the government, which says that the school year timetable will remain the same.