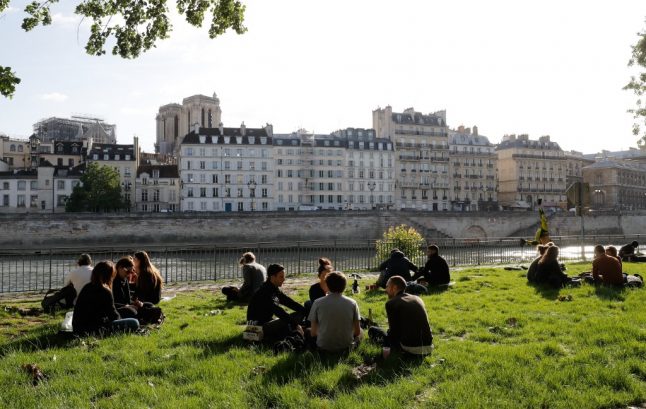 Drinking on the banks of the Seine is now banned. Photo: AFP

Monday, May 11th marked the first day of the lifting of strict lockdown rules and socialising was allowed again after 55 days – but only in groups of 10.

On the pleasant spring evening, people began to gather on the trendy Canal Saint-Martin and soon there were hundreds of people along the canal banks.

Police arrived and dispersed the groups, and later in the evening the Paris Préfecture de Police announced that from May 12th alcohol is banned on all canal banks and river banks in the city.

The ban had been requested by Interior Minister Christophe Castaner, who condemned “the irresponsibility of certain people's behaviour” in an angry tweet on Monday night.

Canal Saint-Martin, in the 10th arrondissement in north east Paris, is a regular hangout for young Parisians who mass there on summer evenings to enjoy drinks and picnics.

Summer in the city usually sees hundreds of people gathered along the Seine banks or canal banks soaking up the sun and enjoying a cheaper night out, but this year looks like to be a little different.

READ ALSO What changes in phase 1 of lifting the lockdown? The restriction on groups of more than 10 people lasts until at least June 2nd, and could be renewed, and the government has already said that 'mass gatherings' or more than 5,000 people will not be allowed until the end of August – or later if infections spike again.

France began on Monday to emerge from its lockdown, although many restrictions remain in place nationwide.

The government has divided France into green and red areas, with Paris and three other regions classified as red seeing a more limited relaxation of the lockdown.

Paris in particular still has a relatively high rate of infections and the Prime Minister has said that the capital is a concern.

Due to its status as a red zone, parks and gardens in Paris remain closed although they have been opened up in green zones.

READ ALSO Red and green départements – what is the difference?

There has been a steady downward trend in France's key coronavirus figures in recent days, although officials warn that caution is still needed and the risk of a second wave remains.

The senior French civil servant put in charge of the easing measures, Jean Castex, has warned that the lockdown could be reimposed if the number of cases surges again.

“In the absence in the short term of a vaccination or a treatment, the French population remains vulnerable to a resumption of the epidemic,” he wrote in his report for the easing of the lockdown.

“The possibility that the (easing) measures can be reversed…. must be anticipated by the authorities,” he added.

The health ministry urged people in its statement to wear masks in some situations in public and observe social distancing, saying: “The epidemic is still active and evolving.”