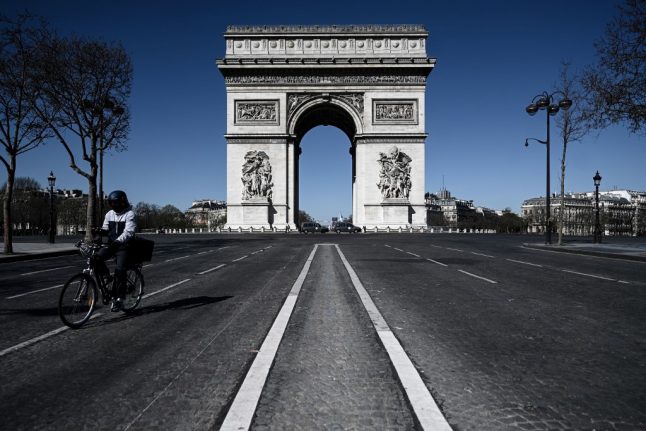 Is France ready to reopen? As the country began to ease its lockdown on May 11th, Paris was nearly as empty as during confinement. Photo: AFP

Taking a small step out the door without a carefully filled out permission slip probably felt like a big step towards freedom for many in France.

On Monday, May 11th, the country officially loosened its strict rules regulating all outside movement, permitting anyone to move freely wherever and whenever they wanted within the limit of 100 km from home.

Shops, hairdressers and beauty salons could reopen again. Bars, restaurants and hotels would have to stay closed for longer.

READ MORE: What changes in France on Monday as lockdown starts to be lifted?

'The virus is still here'

Despite some fear that lifting the lockdown would unleash havoc with people streaming onto the streets, Paris was pretty empty as lunchtime approached on Monday.

It was hard to know if people kept away because of the chilly temperature and strong wind, or because they knew that returning to normal came with a whole bunch of uncertainties – especially in the densely populated capital.

With the coronavirus still circulating on a level high enough to have Paris and its suburbs qualified as red zones on the official coronavirus map, the coming weeks will be crucial.

If the capital successfully lifts the lockdown without provoking a crushing backlash, that would mean anywhere in the country could do it. If not, there might be a new confinement period.

“I think a lot of people have been waiting for this moment, but they also know that the virus is still here,” said Jean-Michel, a journalist who lives on the Rue de Mouffetard, a popular shopping street in the 5th arrondissement of the capital.

Usually crammed, Rue Mouffetard was surprisingly lacking of people. But it turned out that many of the shops in the street normally close on Mondays.

“We'll see what happens in the coming days,” Jean-Michel said.

Like most of the people outside, Jean-Michel was wearing a protective face mask.

Masks has been outlined by the government – after a much-debated flip-flop on their previous mask policy – as key in preventing a backlash. Everyone taking public transport will have to wear one, or could face a €135 fine.

Shops reserve the right to refuse entry to customers who do not wear a masks. Many of the shops that were reopening on Monday had put up signs saying people without mask could not enter.

This store you can walk straight into, but the previous one I visited told customers to stay at the entry so they could have their hands disinfected before going in. pic.twitter.com/4gLloTtySm

“We just opened, so at the moment we have not encountered any difficulties,” said Mickael Hopin, who runs a clothing shop in avenue de Gobelins, southeast Paris.

The shop only allowed one customer in at the time, and all customers (and employees) were required to wear masks. Everyone entering the store was provided sanitising gel to disinfect their hands at the entry.

Hopin said customers were not allowed to touch anything – unless they were certain they would buy it.

“If they do, we have to quarantine the clothes for hours before we can bring them out again,” he said.

IN PICTURES: In salons, shops and schools France begins lifting its lockdown

Trying on something before buying it is however for many a non-negociable standard procedure. In Hopin's shop, which mainly sells workers' outfits and not fashion clothes, the rule could be applied.

But elsewhere shops mostly let customers roam around freely, only asking them to keep one metre distance and restricting the maximum number of people that entered at the time.

In a shoe and clothing shop a little further down the road, customers – all wearing masks as required by a sign outside – touched the items as they pleased.

“At the moment, it's okay,” said Lucien Mesbah, an employee in the shop said from behind his bright blue mask.

“We're asking people to keep a metre between themselves, to put cash on the table instead of in the hand of the cashier, and we have protected some items with plastic film,” he said.

Mesbah was not afraid “at the moment,” but worried about later when the store would fill up with people.

At the same time, filling their stores with customers was exactly what shop keepers longed for, following the major blow the lockdown had inflicted on their businesses.

Many French shops, especially those in Paris, had along with restaurants and bars already taken a massive hit financially from the mass-strikes that halted public transport for the entire month of December and parts of January.

Before that, they had suffered for months during the 'yellow vest movement'.

Now, since the lockdown entered into effect in mid March, Mesbah said their business had lost “around €100 million” – “for its size, that's huge,” he said.

'We'll just have to make do'

Eight weeks is a long time, perhaps especially if you measure it in hair.

By now, many French people were desperate to go to the hairdresser. Outside a barber's in the 5th arrondissement, an old man with grey locks that looked overdue for a trim was trying to get an appointment.

A man hoping to get a haircut had to wait outside in the cold while the hairdresser (swamped with demands) tried to squeeze him in. I don’t think it worked out in the end. pic.twitter.com/tez6J9rluj

In the neighbouring hair salon, Sébastien Fleury had introduced an army-like regime for his employees. After disinfecting their hands, customers had to put their own clothes away in the cupboard, before putting on a robe.

Staff were not to touch the client's clothes. Chairs were to be disinfected between every client. Instead of switching chairs when moving from the wash to the cutting area, customers were to carry the chair with them.

Doors were disinfected, customers needed to pay by card, and all purchasable items had been moved around so that staff easily could get to one without touching any of the others.

Hairdresser Sébastien Fleury was kind enough to spend a good 15 minutes listing their new, rigid safety routines. It’s a lot of disinfecting of equipment. Here he’s showing how they’ve replaced all their products so that they can touch one without touching any of the others. pic.twitter.com/3LX467Avnw

Fleury and his colleagues were all wearing face masks, but also a protective plexiglas headwear, which made them look robot-like.

When he laughed, the only proof was that his eyes squinted and the plexiglas turned foggy.

“Right now it's okay, but I worry about how it will be when we enter intensely hot periods,” he said.

Air conditioning would not be allowed, for health reasons.

“We will just have to make do,” he said.

“Making do” with what they had seemed to echo around from most people in Paris that day. In a boulangerie a little way down the road, Geoffrey Bernardo was selling crisp baguettes and delicous-looking pastry without a mask.

“We haven't received them yet,” he said.

Boulangeries have been able to keep open throughout the lockdown, and Bernardo said they had run through their stock of single-use masks, “which kept breaking.”

But while he “would not necessarily have accelerated (the reopening) this early,” he said things looked as good as they could at the moment.

“People seem to respect the new rules, and so do we,” he said.