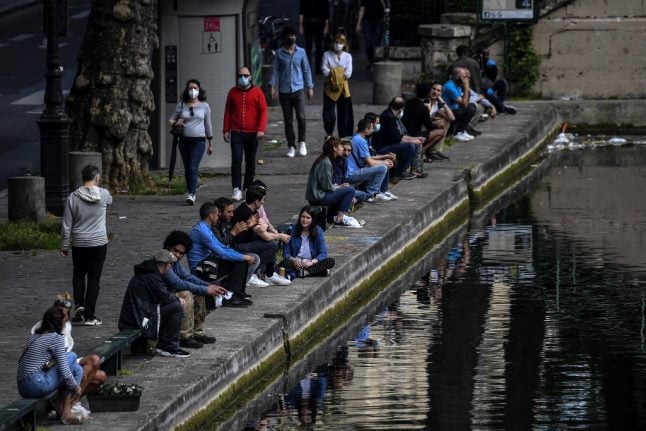 People sit and walk along the Canal Saint-Martin in Paris on May 8, 2020, on the 53rd day of a lockdown, which ended on Monday. AFP

Images quickly spread of social media on Monday evening of the crowds who had gathered along the banks of the canal in north eastern Paris in small groups.

While gatherings of under 10 people are now allowed in France, the fact that the small groups were gathered in such close proximity caused anger on social media and also caught the attention of police.

The country's Interior Minister Cristophe Castaner was also perturbed by the images of young people drinking at fairly close proximity and ordered the police to take action. Images of police, armed with megaphones, dispersing the small groups and asking them to move on, was captured by an AFP photographer.

“The success of deconfinement depends on everyone's prudence and civility,” tweeted Castaner.
“Faced with the irresponsibility of certain people's behaviour, I asked the police authority to ban the consumption of alcohol along the Canal Saint-Martin and the banks of the waterways,” said Castaner.

Canal Saint-Martin in the north east of Paris is a regular hangout for young Parisians who mass there on summer evenings to enjoy drinks and picnics.

There were reportedly similar scenes on Monday evening on the banks of the River Seine in Paris, which reopened after having been closed during eight weeks of lockdown.

It wasn't just people on social media who expressed anger at the images.

“People are punishing themselves. What are we playing at?” Dr. Robert Sebbag, an infectious disease specialist at La Pitié-Salpêtrière hospital in Paris told BFM TV. “Doctors don't want to relive what they went through” at the height of the epidemic.

“We can't mess around with this disease,” he said.

France began on Monday to emerge from its lockdown, although many restrictions remain in place nationwide.

The government has divided France into green and red areas, with Paris and three other regions classified as red seeing a more limited relaxation of the lockdown.

There has been a steady downward trend in France's key coronavirus figures in recent days, although officials warn that caution is still needed and the risk of a second wave remains.

The senior French civil servant put in charge of the easing measures, Jean Castex, has warned that the lockdown could be reimposed if the number of cases surges again.

“In the absence in the short term of a vaccination or a treatment, the French population remains vulnerable to a resumption of the epidemic,” he wrote in his report for the easing of the lockdown.

“The possibility that the (easing) measures can be reversed…. must be anticipated by the authorities,” he added.

The health ministry in its statement urged people to wear masks in some situations in public and observe social distancing, saying: “The epidemic is still active and evolving.”