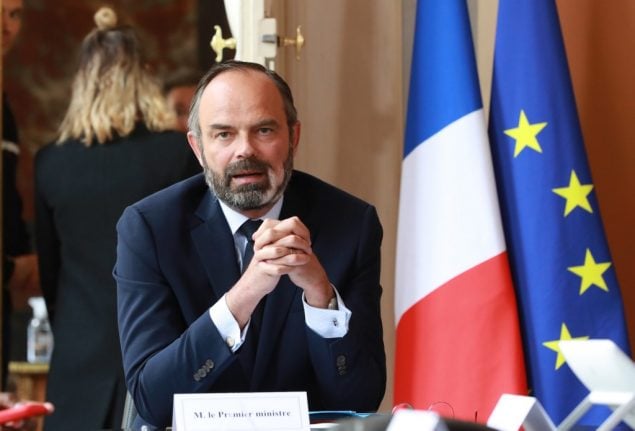 So after a week filled with negotiations with various parties and groups, Prime Minister Edouard Philippe will on Thursday afternoon present the final version of the plan for daily life in France for the next three weeks.

Thursday – the last working day before lockdown is lifted on Monday, May 11th – will see the Prime Minister flesh out his earlier plan with, hopefully, all the details that were missing.

Thursday also marks the day that each département in France is given its red or green designation, which in turn determines how many lockdown rules can be lifted.

An unnamed source from the PM's staff told French media: “We are on the launch pad and Thursday is the pre-shipment check.”

So what can we expect from his speech?

The first thing is an announcement on whether the lifting of lockdown will go ahead at all on Monday. Despite the feverish preparations this is not a foregone conclusion, as the PM has always said that if new infections were still exceeding 3,000 cases a day then nothing will happen on Monday.

The latest medical data is positive – especially the steep drop in the number of patients in hospital – so it is expected that this will go ahead. Orange is used to show where the situation is uncertain, the final map will have only red and green

But even if it goes ahead, lockdown lifting will not look the same everywhere. Throughout the last week, the Health Ministry has been publishing daily maps showing the virus circulation and hospital situation in each of France's 101 départements.

These maps have until now been preliminary, but on Thursday each département will get a formal designation of red – for the areas where there are still a lot of cases and the hospitals are under pressure – and green for areas where the situation is less serious.

Initially there won't be big differences in the rules for red and green départements – some differences in school returns and whether parks and gardens can reopen – but the designation could affect future rules.

Philippe has already announced that travel will be a lot freer, but only for journeys within France of less than 100km. But there remains some confusion about this – how is the 100km measured? Will there be a new attestation for journeys? And what exactly are the rules for whether a journey of more than 100km is essential or not? Hopefully these questions will all be addressed. While there will in general be fewer restrictions and we won't need to fill out a form every time we need to go out and buy cheese (or wine) there will still be rules in place. As well as the above mentioned 100km rule it will also be compulsory to wear a mask on public transport, but will there be fines for breaking these rules? And if so, how much?

Several local officials, including those in Paris, have proposed that people on public transport at rush hour will need a certificate from their employers stating that it is necessary for them to travel to work at this time, and their work cannot be done from home. It is anticipated that Philippe could pass a decree to this effect, but leave the choice of whether to implement it up to local authorities.

Philippe has already been forced to row back on his initial plan for compulsory quarantine/self isolation for anyone in France who tests positive for the virus. After vociferous protest it was announced that it will be voluntary but we still have no detail of the proposed government-provided accommodation for those who don't want to quarantine at home – will it be hotels? Holiday camps as in the initial phase of the outbreak? How do you access them?

This wasn't part of the PM's initial plan but over the weekend there was much confusion when health minister Olivier Véran announced a compulsory quarantine for anyone entering France, followed by a rapid clarification from the president's office that this only applied to people travelling from outside Europe.

There are likely to be questions on it from journalists at the press conference so we may learn more.

It was revealed on Wednesday that there is a parallel plan in place to reimpose the lockdown if the health situation gets worse. Expect this to be at least alluded to as the PM will stress that everything about this first phase depends on the health situation and all measures can be cancelled or reversed if there is a renewed spike in cases.

And what we don't expect

Philippe has already said that there will be no decision on reopening bars, cafés or restaurants until the end of May while on the question of summer holidays and travel several politicians – including president Emmanuel Macron on Tuesday – have repeated that is is too early to say.

Likewise with phase 2, we know it will begin from June 2nd, but officials say we will only know what that will involve once they have had a chance to see how phase 1 is going.