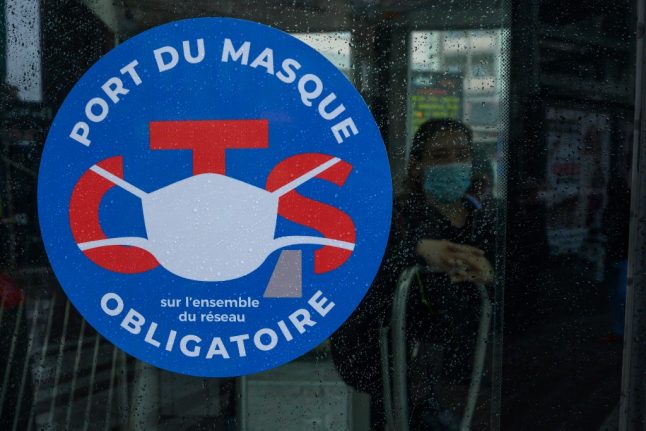 Masks are now compulsory in some places, but not everyone can get one. Photo: AFP

A few days before the end of the lockdown I went to pick up my free face mask, distributed by my local mairie.

And it was all very efficient – after getting a letter from the mayor explaining that every inhabitant of the commune was entitled to two free, washable fabric masks I made an appointment online and the next day went to one of the 19 pick-up points available in the town.

Well that was all very efficient, made an appointment online with the mairie yesterday and just been to pick up my (free) mask pic.twitter.com/8nNa3VER8t

There volunteers were checking names off lists and handing out masks. For the elderly or vulnerable, the mairie is now organising free home delivery of masks.

But the following paragraph in the letter from my local mayor hinted at problems elsewhere: “Faced with the shortcomings and speeches without any real meaning from the State, we decided to act to bring solidarity and fraternity to life.”

Meanwhile friends and colleagues who live just a couple of kilometres away are still wondering how to get their hands on masks and many shops have no supplies in – even though masks are now compulsory on public transport, at the hairdresser, for teachers and in some shops and workplaces.

And it's a situation that is replicated across France as distribution methods and mask available varies widely depending on where you live. Some local authorities – including those in Cannes or Nice – have been distributing masks for some time while in other cities, including Paris, distribution is still in the early stages.

Some people in rural France report that their local mayor has done door-to-door deliveries, while others have been haunting the supermarkets and pharmacies in the hope of new stocks.

In Paris, masks have been distributed by City Hall to those in vulnerable groups – the over 70s and those with underlying health conditions – although delivering these free masks to these groups has proven complicated for authorities.

Distribution for non-vulnerable people only began on Monday May 11th, several weeks after it was announced.

The process requires Paris residents to fill in an online registration form here.

Once it’s completed, Paris authorities send out an email which specifies a date and a pharmacy at which the free mask can be picked up.

You will be asked to show a form of ID and proof that you ordered the mask.

Every Paris resident over the age of 11 is entitled to a free, washable cloth mask and city authorities have bought millions.

They have received certification by France’s national organization for standardization (Afnor) and are manufactured in Île-de-France.

The order is limited to 6 masks per household.

Vulnerable groups such as over 70s, people with longstanding health conditions as well as those with PUMa universal healthcare coverage, CSS beneficiaries (formerly CMU-C), people with disabilities and pregnant women are all given priority in terms of available stock.

It’s also possible to register for a free mask over the phone by calling 3975.
Anyone who isn’t physically capable of picking up their mask can have someone else do it for them as long as they bring proof of ID and the order.

Since the system was officially set up on May 11th, a couple of pitfalls have emerged: the list of all partner pharmacies taking part in the scheme isn’t provided and there is already a growing delay in terms of available appointments to pick up the free masks.

Some of the local arrondissement mayors in Paris have begun their own distributions to residents and masks have been handed out on public transport over the last week to essential workers.

Community groups have also set up workshops where people can volunteer to help sew and distribute masks.

In the greater Paris region many local authorities – including mine in Bagnolet – began distribution from May 4th.

The most common model in the Seine-Saint-Denis, Hauts-de-Seine and Val-de-Marne départements is registering online or by phone for an appointment, then going to one of the distribution points set up by local mairies in schools, sports grounds, cultural centres and government offices.

Many other local authorities around France are already distributing masks and in some places, including Cannes and Nice, local authority workers and mayors have been handing out masks to essential workers for several weeks.

The distributions from local authorities are free, but if you prefer not to wait it's also now possible to buy masks.

At the start of the outbreak, concerned about shortages for healthcare staff and other essential workers, the French government requisitioned all mask stocks and it was only possible to get a mask at the pharmacy with a prescription.

That rule was relaxed from April 25th, but it has taken some time for new supplies to arrive in shops and some are still struggling to meet the demand.

Large supermarket chains including Auchan, Leclerc and Carrefour have ordered in supplies and masks can also be found at pharmacies and tabacs.

Many people have also resorted to making their own masks, but health minister Olivier Véran has cautioned that many home-made masks do not meet technical specifications and has asked people to use supplied or bought masks if possible.

French President Emmanuel Macron on Friday condemned the US Supreme Court’s landmark ruling striking down the right to abortion, saying it was a challenge to women’s freedoms.

“Abortion is a fundamental right for all women. It must be protected. I express my solidarity with the women whose freedoms are today undermined by the Supreme Court of the United States,” he tweeted.

“The overturning by the US Supreme Court of the right to abort is a major setback for fundamental rights,” she wrote on Twitter.

“France will continue to defend them,” she added.

On Friday, the conservative-dominated court overturned the landmark 1973 “Roe v. Wade” decision enshrining a woman’s right to an abortion, saying individual states can restrict or ban the procedure themselves — which half appear poised to do.

The Supreme Court ruling will likely set in motion a cavalcade of new laws in roughly half of the 50 US states that will severely restrict or outright ban and criminalise abortions, forcing women to travel long distances to states that still permit the procedure.

France was relatively late to legalise abortion – terminating pregnancy was legalised in 1975, driven by the politician and holocaust survivor Simone Veil – still a revered figured for many French feminists.

Before 1975 abortion had been illegal and vigorously prosecuted – the Vichy government that ruled France during World War II made it a capital offence and the last person to be executed under this law was Marie-Louise Giraud, who was guillotined in 1943.

READ MORE What is the law on abortion in France?

The law has been progressively relaxed since then, with the most recent change to the law occurring in February 2022.

Until then, the limit for on-demand abortion was 12 weeks, but this was extended to 14 weeks in one of the last bills passed under president Emmanuel Macron’s first term as president.

There is no requirement to to prove a risk to either the physical or mental health of mother or child in order to secure a termination.