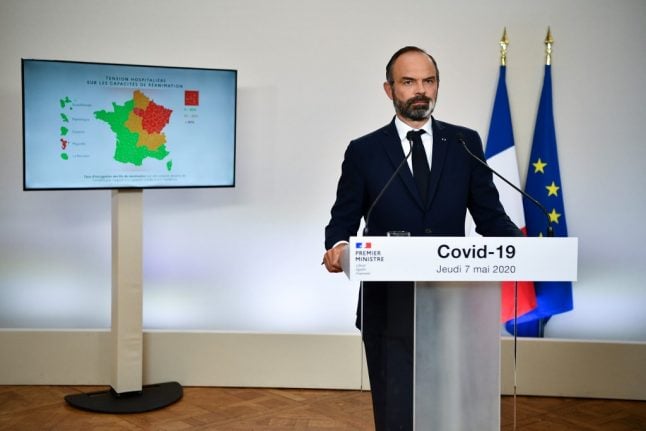 “The progressive lifting of lockdown can go ahead as planned,” Philippe said, as he and several government ministers presented the final plan to ease the lockdown put in place on March 17th.

On Monday May 11th, eight weeks after the French were confined to their homes after the virus has claimed over 25,000 lives, the government will begin to gradually ease the restrictions on movement.

While the PM had already presented a detailed plan last week as to how this will happen, some elements remained unknown.

The government had previously said it did not exclude postponing the lockdown if necessary. The PM therefore began his speech by confirming that the original date will be maintained.

“It’s a new step and good news for the French people,” the PM said.

“The country is divided in two,” Philippe said, referring to the map of red and green areas that details the difference in the local level of the spread of the virus and the pressure on hospitals' intensive care units.

“For the main part we managed to slow down the epidemic wave (…) these are the green departments,” said Philippe.

Four regions – the Ile-de-France region around Paris, Hauts-de-France in the north, Grand Est in the east and the southeastern region of Bourgogne-Franche-Comte – still have a red classification denoting heightened concern

READ ALSO: What will be the difference be for people living in red and green départements?

In those areas, the French PM said the easing of the lockdown would come with certain restrictions. Public parks and gardens would stay closed as well as secondary schools (collèges).

He also warned that only those départements that remain green for the next three weeks will be able to move on to “phase two”, when restrictions are set to be eased further in June.

“If they stay green for the next three weeks, we can consider a new phase of deconfinement at the beginning of June,” said Philippe.

READ ALSO: Discover the final map that shows which départements in France are red and green Paris region of Île-de-France and the overseas territory of Mayotte were the two regions that saw a particularly high level of circulation relative to the rest of the country, the PM said.

“In Île-de-France, the number of new cases is decreasing but it remains high, higher than we want it to,” Philippe said.

“We will begin to ease the lockdown (in Île-de-France), but seeing as this region is very densely populated, we need to practice a very strict discipline,” he said.

“I don’t exclude that we will introduce additional measures if the current rules are not respected,” he said.

The government has outlined a “phase one” for easing the lockdown, from May 11th to June 2nd. At the end of this period a conclusion will be drawn that will determine what happens next, in “phase two.”

Health Minister Olivier Véran said Île-de-France inhabitants would “need to be extremely vigilant” in the time to come.

“The virus has not disappeared,” he said.

“In the coming weeks, health precautions like hand-washing and social distancing will be very important,” he said.

Véran told the public if they had symptoms of Covid-19 to contact their doctor who would then prescribe a test.

If the test is positive, the doctor will continue to monitor the patient – preferrably via online consultations – until at least two days after the last symptoms.

People who test positive can either isolate in their own home or in a hotel, the PM said.

Anyone identified as having been in contact with someone who has tested positive for the virus must isolate for seven days.

After those seven days have passed they will be prescribed a coronavirus test. If the test is negative, they can isolate for seven more days before going back to work.

As of May 11th, people in France will be allowed to move freely in an area of less than 100km from their home. Anyone travelling further can only do so for “imperative family or professional reasons”.

Those travelling inside Île-de-France will need a certificate from their employers stating that they cannot work from home if they are travelling at rush hour. The PM did not specify these hours, but usually they are set between 6am and 9.30am and 4pm and 7pm.

The government confirmed that everyone over 11 years old must, as of May 11th, wear a mask on public transport or face a fine of €135.

The government also said public transport services between regions would be severely limited in the coming weeks to encourage people to avoid unnecessary travel.

Borders will remain closed for non-essential travels – Europe included – for the time being.

Taking public transport without a mask will be a punishable offence for anyone over 11 years old as of May 11th. Offenders can be be fined €135.

You can also be fined €135 if you travel more than 100km from your home address without good reason. Police will continue to conduct checks at strategic points such as train stations and highways.

Primary schools will reopen as planned from May 11th but progressively – confirmed Education Minister Jean-Michel Blanquer.

“We will see a little more than one million pupils go back to school (next week),” he said.

About 130,000 teachers will return to work as of next week. On Tuesday May 12th pupils will return as 80 to 85 percent of pre-school and primary schools (écoles maternelles and elementaires) reopen.

Secondary schools (collèges) will begin to reopen from May 18th albeit only in areas of the country coloured green.

A decision on whether to reopen high schools (lycées) will be made before the end of May.

UPDATE: How France's plan to reopen schools has changed

Economy Minister Bruno Le Maire confirmed that the government’s solidarity fund – the fund set in place to help self-employed and small business owners – will be extended to include the month of May.

Coronavirus: All you need to know about financial help in France for self-employed and business owners

Shopping centres larger than 40,000 square metres can reopen if they get permission from regional authorities.

The PM said “no one among the elderly and vulnerable would be forced to exit lockdown.”

“There won’t be a mandatory lifting of lockdown for vulnerable people,” Edouard Philippe said, adding that they would need to be extra careful in the coming weeks if they were to re-enter into contact with family and friends.

“We are trusting those vulnerable (..) to take the necessary precaution to protect themselves and others.”

The main rule will be to keep beaches closed, however the interior minister said the government had decided to allow mayors to ask for local exceptions to give limited access to their lakes and beaches.

France on Wednesday reported 278 new deaths from coronavirus in 24 hours, bringing to 25,809 the number of people confirmed to have died in hospitals and nursing homes.

But it also announced a new steep fall in the number of patients in hospital and intensive care.