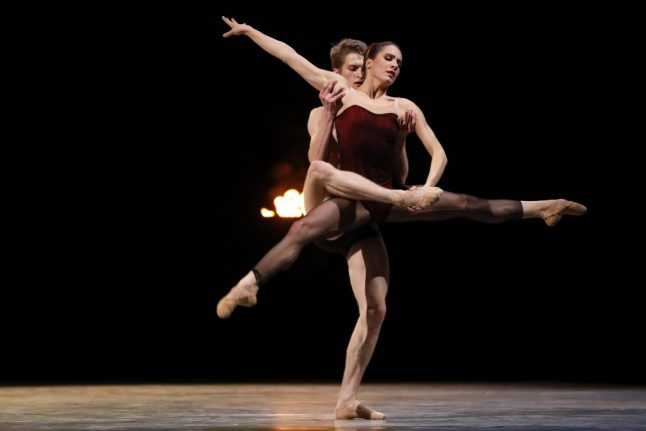 The dancers of the Paris Opera. Photo: AFP

While France is less than a week away from beginning to lift its strict, nationwide lockdown, much of the country’s arts and culture sector must remain closed for the time being.

Macron promised the government would not abandon the industry, and in a meeting with representatives from the French arts sector laid out the steps to support them through the crisis.

These included prolonging financial support for intermittent artists, making authors eligible for the solidarity fund for the self-employed and guaranteeing bank loans for small festivals.

In Wednesday's video conference, Macron promised he had heard the calls for help, especially regarding what in France is known as intermittents du spectacle – temporary show business workers.

Intermittents is a wide group spanning professionals in the culture sector whose jobs usually depend on seasonal hits such as festivals, like comedians, filmmakers, festival creators, dancers or set designers.

They benefit from a special unemployment insurance scheme where they receive a monthly stipend paid by the state providing they work 507 hours over a 12-month period.

As most of the country's cinemas, concert halls, theatres and festivals will have to remain closed in the coming months, many intermittents will not be able to fill up this required slot – meaning they lose the right to the title and the support that comes with.

The president said state help for these groups was to be extended by 12-months.

“I want us to engage to extend (the status) of intermittents until the end of August 2021,” he said.

Macron also said authors will be eligible for financial help from the national solidarity fund.

This fund provides up to €1,500 in monthly support for self-employed and small business owners for March, April and May respectively.

READ MORE: All you need to know about financial help in France for self-employed and business owners

“The state will be there with funding, together with the public investment bank,” Macron said.

“The goal is that small festivals can benefit from (these state backed loans), to avoid them being bought by big actors and structures,” he said.

France has rolled out billions in guarantees for banks to incentivise them to grant loans to struggling businesses.

The president said he wanted to set up a special compensation fund for festivals and cinema film shoots that needed to be canceled.

“We will put everything in place (..) to ensure that the independent (workforce) can remain independent,” Macron said.

Art in schools
“We should use this period to revolutionise the access to culture and arts,” the president said, opening up for the possibility of merging the problem of artists lacking work with schools lacking staff.
“We need you in schools. (..) There will be small groups of 10 children,” he said.
“We need the breathing space and have you help our children.”

As for the question of when things could reopen, the president said he could not answer.

“I don't know where the epidemic will be next season,” he said.

“We need to live with the virus,” Macron said, adding that some of the country's smaller libraries, art galleries and theatres would be able to reopen in the period following May 11th – but not all.

“We need to marry common sense and innovation (to find the answers) – which is what you know to do,” he said, addressing the artists. The dancers of the Paris opera went on strike in December, now they're facing huge revenue losses due to the coronavirus emergency. Photo: AFP

'A state of emergency'

The French government has been under growing pressure to act to help the struggling industry, after Le Monde published a open letter titled “Mister President, you have forgotten art and culture, make amends!” on April 30th, signed by a range of celebrities in like Catherine Deneuve, Omar Sy and Jeanne Balibar.

Famous French actress Isabelle Adjani wrote a letter to the president, read out loud on France Inter on May 5th, in which she asked him to declare a state of emergency to save the country's culture sector.

The world-famous Paris Opera is looking at losses of €40 million this year, its director warned Tuesday, and may not reopen until 2021.

The company was already hit by a catastrophic strike over pensions reform earlier this year before the coronavirus brought the curtain down again in March.

Director Stephane Lissner told French public radio that if social distancing rules in France were not lifted before September, it might make more sense for its two opera houses to stay closed for building work which had been planned for later in 2021.

“It is just not workable,” Lissner said of the recommendations, which require two empty seats around each audience member.