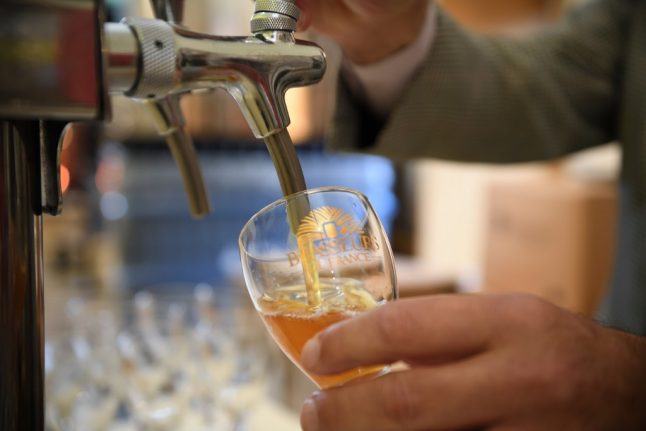 Millions of undrunk beer will be poured down the drain as French bars remain shut for the time being. Photo: AFP

Most of the wasted brew is craft beer, which is often unpasteurised unlike traditional blonde lagers, and quicker to spoil, said the Brasseurs de France.

“These are very hoppy beers, and if they are kept for too long, when they spend more than two to three months in storage, the olfactory and taste effects, the aroma, disappears,” brewery association boss Maxime Costilhes told AFP.

The body blamed the closure of cafes and restaurants, an abrupt halt to tourism and the cancellation of festivals and expos under France's strict epidemic lockdown for leaving more than 10 million litres of beer unconsumed, most still in casks.


The number was compiled from the association's 300-odd members, which represent 98 percent of beer production in France.

It represents but a drop of the estimated 22.5 million hectolitres of beer the country is set to produce in 2020, but nevertheless comes at a loss of millions of euros to producers.

The country, better known for its wine, has seen beer sales soar in recent years, spurred by an increase in craft brewing. Brewers work in an ephemeral brewery set by French brewers association 'brasseurs de France' in a winery of the Bercy district of Paris.

“The destruction of this beer will have come at a significant cost for businesses,” said the association, appealing for public aid to compensate for the bitter loss.

“We are a very indebted sector since we invested €241 million in development in 2019 – a significant figure for a turnover of just over four billion euros,” said Costilhes.

About a quarter of French brewers are out of action under the country's virus-busting confinement measures, with home consumption failing to make up for sales lost with France's vital hospitality industry at a near standstill. France will not be reinstating its cherished happy hours in the near future. Photo: AFP

About 70 percent of brewers have reported losing half their turnover or more since mid-March, said the association.

France is to start emerging from two months of lockdown, put in place to limit the spread of the coronavirus, next Monday.

But many people will continue working from home, and cafes and restaurants – an essential part of the French social fabric – will remain shuttered at first.

About a quarter of French brewers have benefited from a solidarity fund set up to help companies in the grips of the worst economic crisis in decades.