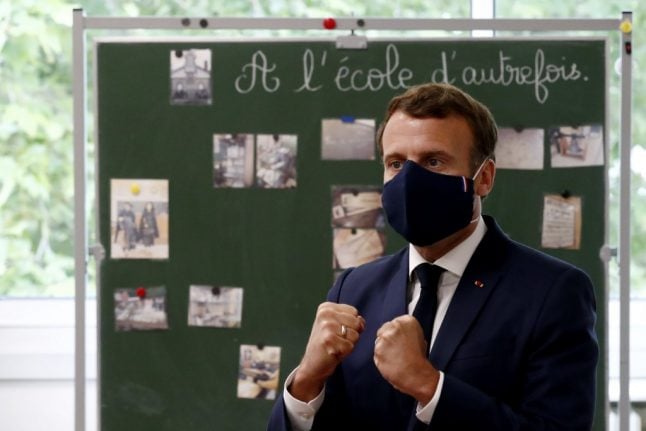 Emmanuel Macron was visiting a school today ahead of the partial reopening next week. Photo: AFP

The government will on May 11th start easing the strict stay-at-home orders imposed since mid-March against a virus that has killed more than 25,000 people in France.

But people will not be allowed to travel more than 100 kilometres from their homes for the time being, and bars, cafes restaurants and cinemas will remain closed.

READ ALSO When will be able to travel to France again

And there is currently no plan to lift the strict ban on non-essential travel into France.

Macron said in a televised interview: “We're going to limit major international travel, even during the summer holidays.

“We will remain among Europeans, and maybe we will have to limit that even more.”

A spokesperson for the Prime Minister's office confirmed to The Local that the travel restrictions on people entering France will continue after May 11th.
The PM's office could not give a date on when they would end but said “everything will depend on how the virus is circulating both within France and abroad”.
Scores of summer concerts, sporting events and other activities have already been cancelled, and until July 24th at least, France will require people arriving from outside Europe to remain in quarantine for two weeks – effectively ending many overseas trips as well as the country's hugely important tourism industry.

“The virus is still here, we have not beaten it,” Macron warned.

Macron's government faces growing criticism of its post-lockdown plans, in particular the move to start reopening schools next week, even as hard-hit European neighbours Italy and Spain push back any return to class until September.

Nearly 330 mayors in the greater Paris region have urged the government to push back the school openings, saying the strict health measures including a limit of 15 students per class are proving difficult to implement.

But parents worried about exposing their children to infection will not be forced to return them to school.

“I understand their questions, their concerns,” Macron said, though he added: “For a child, being forced to stay home for two months is quite a traumatic experience.”

He said his goal is “for all students who need to return, because they are falling behind, because their families are unable to help them study, because their parents have to work… that they are able to go to school.”

Government ministers are set to meet on Thursday to finalise the post-lockdown measures and determine which regions are still facing critical contagion risks, which could limit any easing of travel restrictions.

Macron also urged people to continue with social distancing and other protections to limit the outbreak.

“We don't want to start sliding back after three weeks” and be forced to reimpose lockdown, he said.