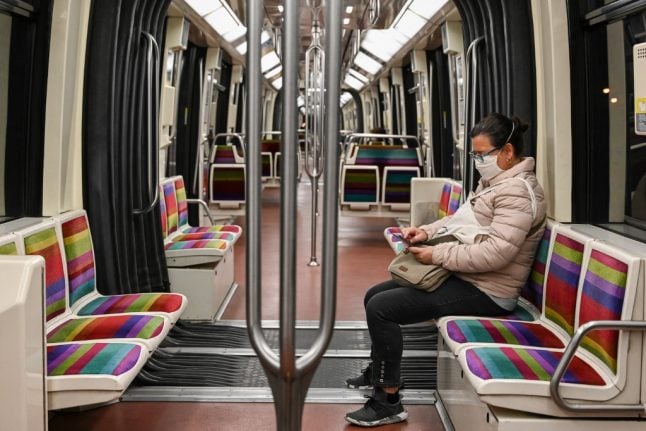 As France prepares to begin a gradual easing of the strict nationwide lockdown as of next week, the country's public transport sector prepares for a surge in the number of daily passengers.

However the government has said that transport services will not go back to a normal level straight away, in order to incentivise people to avoid them if possible and to ensure that social distancing measures be respected on buses, trains and the Paris Metro.

French Transport Minister Jean-Baptiste Djebbari declared that “a certain number of (Metro) stations” will be closed in the capital as of May 11th.

Djebbari did not specify which stations would be closed, but the transport ministry will reveal a detailed transport plan this coming Friday, May 8th.

In Paris the Metro, bus and tram services will operate at around 70 percent of normal as of May 11th.
Lines 1 and 14, which are automated, will run at 100 percent.
However capacity on Metro trains will be reduced with authorities make one in every two seats out of action as seen in the diagram in this tweet from Le Parisien.
Each carriage will roughly accommodate only 32 passengers and each train around 160 maximum.

Paris mayor Anne Hidalgo has however declared that, those who can, should use alternative means to avoid overcrowding the public transport services.
Her office on Tuesday said it would significantly expand bike lanes and create new temporary lanes along the route of several Metro lines. In total, 50km of roads normally reserved for cars would be given to cyclists, the city has said.
Wearing a face mask will be compulsory on the Paris Metro, trams and buses and indeed on all public transport in France.

The national rail company SNCF will also run on a severely limited service next week, according to French daily Echos.

Only 15 percent of the country's high speed TGV trains will run as of May 11th, up from 7 percent today.

This is much less than the 50 to 60 percent originally reported.

Tickets will be restricted to half of the seats of the train to ensure that users may comply with social distancing measures.

The SNCF has said it would work with authorities to “filtrate the access to stations” in order to prevent overcrowding.

The SNCF hopes to restore its regional rail services to 100 percent at the beginning of June, the company has said.

The coronavirus will cost the company €2 billion this year, the company has previously stated, which management fears could lead to layoffs.

Over the past days, both rail companies and unions had said they worried about the safety of both travellers and personnel if the number of commuters to massively increased as of May 11th.

In a letter written to French Prime Minister Edouard Philippe, the bosses of SNCF, RATP, Keolis and AGIR – which together represent over 90 percent of all public transport networks- said “operators do not have the means necessary” to ensure a safe travel for all of their passengers from May 11th.

“It's irresponsible to reopen society like this,” Matthieu Bolle-Reddat, General Secretary of the CGT union representing rail workers in Versailles, southwest of Paris, told The Local.

Rail companies and unions have said that they will need help from law enforcement to ensure that commuters follow security measures.