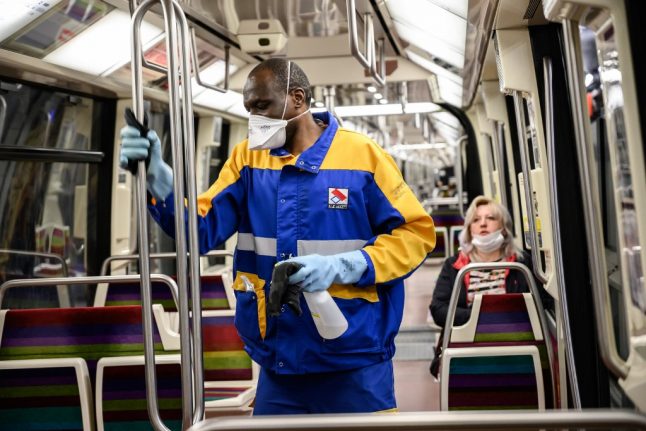 As of next week, when France takes its first steps towards some kind of return to normality, the number of people taking public transport every day will inevitably increase as employees return to work.

But French rail companies have sounded the alarm that they cannot guarantee the safety of passengers under the current circumstances.

In a letter written to French Prime Minister Edouard Philippe, the bosses of SNCF, RATP, Keolis and AGIR – which together represent over 90 percent of all public transport networks- said “operators do not have the means necessary” to ensure a safe travel for all of their passengers from May 11th.

The letter was obtained by French daily Le Parisien.

“We consider it our duty to inform of the very high risk of public disorder that will necessarily lead to halting public transport,” the signatories stated.

The heads of the rail companies said they lacked both in material (especially masks) and personnel to ensure that everyone can travel while respecting the government's national health advice.

They told the PM that “mobilising police, national and local, will be an indispensable condition to regulate the flux” of passengers. Rare scenes on the Paris metro these past weeks, as the capital's commuters have been reduced to a bare minimum. Photo: AFP

The rail companies' call for help has been echoed by several rail unions.

“It's irresponsible to reopen society like this,” said Matthieu Bolle-Reddat, General Secretary of the CGT union representing rail workers in Versailles, southwest of Paris.

The CGT union is a hardline union that spearheaded the December transport strikes protesting the government's pension reform plans.

Bolle-Reddat, who is a train driver on the Paris suburban Transilien rail service, told The Local that, rail companies would not be able to ensure for the safety of either passengers or drivers if numbers significantly increased as of next week. Starting May 11th, everyone must wear a mask on public transport in France. Photo: AFP

Bolle-Reddat was working on Monday and said the situation right now was “quite good.”

“Only key workers are taking public transport so the stations are pretty empty,” he said.

The number of daily commuters in the Paris region has been reduced to about four percent since most of the country’s workforce was confined to their homes on March 17th.

At the same time, railway services have been operating at a bare minimum. In Paris, Metro, bus and tram services were slashed to about 30 percent.

Most of the services operating have been concentrated in the suburb of Seine-Saint-Denis, which has a high number of key workers such as healthcare workers, street cleaners and supermarket staff who commute into Paris.

In the tweet below, Le Parisien has sketched out a scenario where the Paris’ Metro is complying with general health advice on social distancing.

If the passengers are to keep the required one metre between themselves, each metro train can carry up to 160 people at the time, 32 people per carriage.

Bolle-Reddat said he worried about how the rule that commuters must wear a face mask on public transport would be enforced.

“We transport around 12 million people every day,” he said.

“Let's say we cut that in two, that means 6 million people will be travelling with us every day. Who is going to make sure all of these people use a mask?”

'Our duty to serve the nation'

If rail workers deemed conditions to be unsafe, Bolle-Reddat said, CGT called on them to make use of their “droit de réserve,” (reservation right) which is the right to withdraw from a workplace that is not complying with safety rules.

The Unsa union – which represents the highest number of workers in the Paris RATP transport service – has asked their workers to do the same if work conditions aren't “perfect,” the union told France Info.

Making use of the reservation right would not entail workers staying home, Bolle-Reddat explained, but it could mean them staying in their offices until “necessary measures” were taken. In practice, this could entail pausing trains to wait for a cleaner to come, for example.

“At the moment, we are not calling on workers to strike,” the CGT union member said, “because we serve a lot of stations close to hospitals.”

“It's our duty to serve the nation,” he said. In Paris, authorities have been handing out one-time face masks on key transport stations the pas couple of weeks. Photo: AFP

The government is currently in the process of thrashing out a detailed plan for how to lift the lockdown in each of France's 101 départements.

“The confinement has been effective, it’s worked, there was no other solution,” said French President Emmanuel Macron during a press conference on Monday.

This new phase will involve ramping up the country's public transport services.

As of next week, in Paris, the Metro service should be reaching 70 percent of its normal service.

Lines 1 and 14, which are automated, services will run at 100 percent.

Paris mayor Anne Hidalgo has however declared that, those who can, should use alternative means to avoid overcrowding the public transport services.

Her office has also said it is working on a plan to expand bike lanes and create new temporary lanes along the route of several Metro lines.

The national rail company SNCF will also run on a strictly limited service as of May 11th, according to French daily Echos.

Only 15 percent of the country's high speed TGV trains will run as of next week, up from 7 percent at the moment. This is much less than the originally reported 50 to 60 percent-of-normal service.

That means between 80 and 90 TGV trains will run every day, against 600 on a normal service day.

Tickets will be restricted to half of the seats of the train to ensure that users may comply with social distancing measures.

The SNCF hopes to restore its services to 100 percent at the beginning of June.