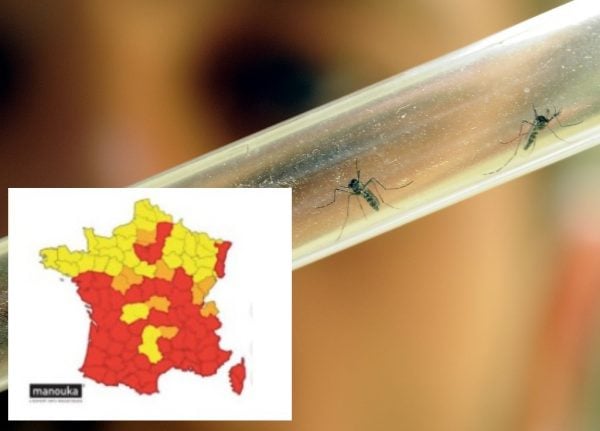 This year 57 of France's 101 départements have been given a red warning about the potentially deadly insects.

A further 10 départements have an orange warning from the wildlife group Vigilance-Moustiques.

The black and white striped mosquito, which can deliver a painful bite as well as potentially deadly tropical diseases including dengue fever, zika and chikungunya, was first spotted in France in the last decade and made it to Paris in 2014. Since then it has been expanding the territory it is spotted in over the summer as global temperatures rise, although it is still most commonly seen in the southern half of the country.

Since 2010, there have been at least 50 reported cases of dengue fever and chikungunya in people who have not been to countries where those illnesses are prevalent, thought to have been spread by tiger mosquitoes in France.

Experts have previously said they think that France will be fully colonised by 2030.

In even worse news, it seems that mosquito traps and repellents being tested by local authorities are not very effective.

Sleeping under a mosquito net will protect you at night, but unlike European mosquitoes, tiger mosquitoes come out during the day as well as at night.

The best advice that experts can offer is to make sure there is no standing water near your home, as this is where mosquitoes breed.

Researchers are currently looking into other methods of control such as sterilising female mosquitoes.

Although dengue fever, zika and chikungunya can prove fatal, they are rarely so with good medical treatment.

Départements in red are: