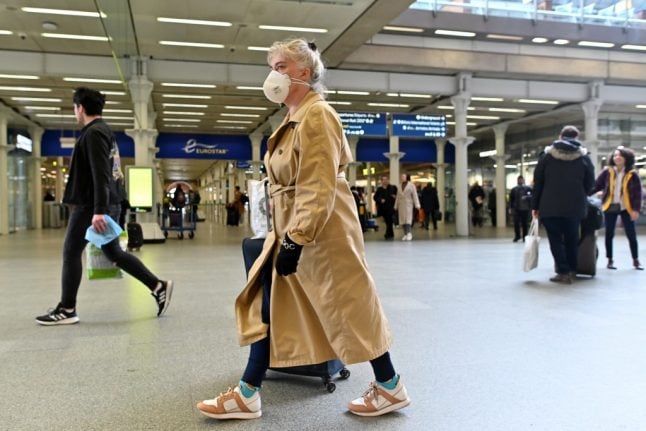 “From May 4th, passengers must wear a face mask or face covering at our stations and on board in line with guidelines announced by the French and Belgian governments,” the company said on its website.

UK-based Eurostar has been running a reduced timetable since the outbreak, because of movement restrictions, enhanced border checks and lower demand.

READ ALSO When will I be able to travel to France?

It warned passengers on its cross-Channel trains between London, Paris and Brussels that anyone not covering their mouth and nose may be refused travel or fined by the French and Belgian authorities.

The measures are among several to be introduced as governments on both sides of the Channel look at easing stringent lockdown restrictions.

Catering facilities on trains and in stations have been closed, and special assistance suspended because of social distancing requirements, the company said on its website.

It also advised passengers that France was restricting travel to EU citizens of mainland continental Europe returning home to their main residence.

UK and non-EU citizens with a residency permit in an EU country, plus essential workers, were allowed to travel, it added.

But all passengers required additional paperwork in France to show their trip was essential.

Belgium, which has had the highest per capita rate in the world — 67 per 100,000 people — begins to ease its lockdown on Monday.

Belgium's method of compiling data imputes some deaths to COVID-19 even if a test has not confirmed it, which is not the case in many other countries.

Meanwhile, anyone travelling on public transport in Belgium is required to cover their mouth and nose or risk a fine.

France, which has had nearly 25,000 deaths, has made a similar requirement. It is gradually lifting its restrictions from May 11.

Britain, which has had more than 28,000 deaths, has not told the public to wear masks, although Prime Minister Boris Johnson this week indicated they could be “useful” when restrictions are lifted.