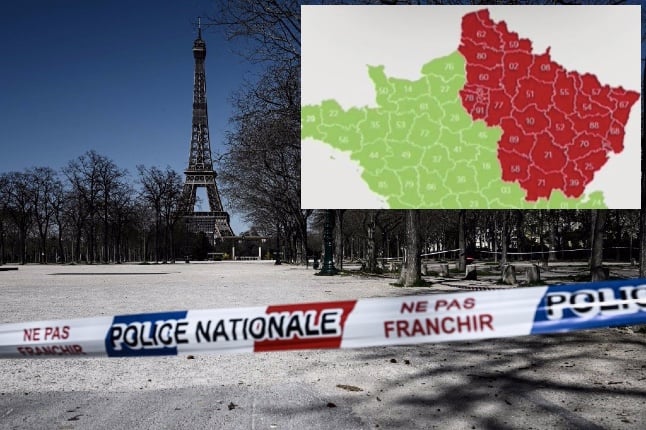 When Prime Minister Edouard Philippe presented his plan for lifting the lockdown, he said that each of the country's 96 mainland départements would be given their final colour designation on May 7th, in effect determining the extent of certain changes to their lockdown restrictions four days later.

On Thursday May 7th the Health Minster Oliver Véran presented the final version of the map that split the country into green and red zones, classifying each area according to its state of affairs regarding Covid-19 and consequently determining how some restrictions might be maintained or eased from May 11th onwards.

Three criteria are used to apply the red or green rating are:

READ MORE: What is the criteria used to determine if a département is marked red or green?

But what will be the impact on daily life if a département is coloured red or green on and after May 11th? Will it mean green départements will return to normal life and red ones will stay under strict lockdown?

“Regarding the lifting of France’s lockdown measures, most of it will be the same regardless of the department in which you are located,” Minister of Health Olivier Véran said previously.

As it stands the main measures for after May 11th are set to be the same across the whole country for both red and green départments.

READ MORE: REVEALED The plan for life in France after May 11th

But there are some things that will happen in green zones only from May 11th, although local authorities have the right to make changes in accordance with local conditions.

The main differences for those in green départements are the reopening of parks and gardens and from May 18th the possibility that secondary schools (colleges) can reopen.

Prior to Thursday the Ministry of the Interior has published a checklist of reopening.

Things that will stay closed in both red and green départements after May 11th;

Not allowed in red or green départements

Things that will open in both red and green départements after May 11th;

Things that can only open in green départements

There are also likely to be some differences to school reopenings in different areas, but here the final decision is down to local authorities. Many mayors, particularly in the badly affected Paris region, say they do not feel ready to reopen primary schools.

In terms of public transport the government has also warned that there will be tight restrictions in the Paris region for at least three weeks.

“It will be possible if necessary to close schools, to close a certain number of shops and outdoor spaces,” he said.

The government has already decided that local authorities will have the power to close large shopping centres if necessary.

So while things may change after May 11th, depending on the spread of the virus and the government may decide to give more power to local authorities to maintain some of the stricter restrictions, the difference between being in a red zone département and a green one will initially not be that significant.

But on Thursday the French PM Edouard Philippe suggested the next phase of easing lockdown In June will also depend on whether départements are coloured red or green.

France's PM said those départments that remain coloured green in three weeks will be able to ease restrictions even further.

“The country is divided in two: in the major part we managed to slow down the epidemic wave (…) these are the green departments,” said Edouard Philippe. “If they stay green for the next three weeks, we can at the very beginning of June consider a new phase of deconfinement.”

That would not be the case for red départements.

He also suggested those living in red départements must be more vigilant with how they respect social distancing.