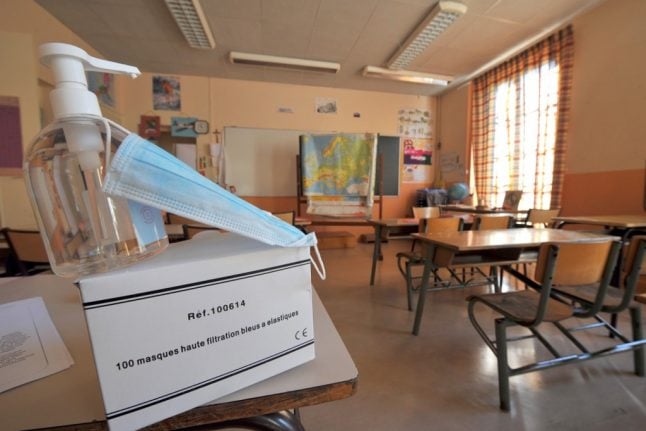 A photo of protective face masks and antibacterial hand gel taken in a classroom in Caen in 2009 during the swine flu pandemic. Photos: AFP

The protocol, due to be unveiled by the education ministry Friday but seen by AFP, details guidelines for frequent handwashing, disinfecting of crayons and other shared items, and maintaining a safe distance between pupils.

Prime Minister Edouard Philippe announced Tuesday that kindergartens and primary schools can reopen after France's lockdown officially ends on May 11th, but with strict hygiene and distancing measures seeking to prevent a second wave of coronavirus infections.

There can be no more than 15 pupils to a class, he said.

Junior high schools can open the following week, though only in areas not hard-hit by the epidemic that has claimed more than 24,000 lives in France.

A decision will be made in the coming weeks on when to reopen all high schools.

If not enough taps are available, schools can use sanitising hand gel, including for the very young under adult supervision.

Wearing a face mask will not be compulsory for primary school kids, and is actively discouraged for children of nursery school age, but all teachers and assistants will have to wear one. The protocol urges schools to “prohibit ball games and contact games” during break time and to ensure that children do not “exchange personal objects.”

If an object is touched by more than one child, it must be disinfected after each one.

In the classroom, the document urges teachers to limit contact between children by directing foot traffic in a single direction with the help of markers on the floor, for example.

Parents will be asked to take their child's temperature every morning before school.

While several other countries have delayed reopening schools until after the summer, France's proposal to resume classes has been controversial.

Education Minister Jean-Michel Blanquer has said teachers will go back to school first, on May 11, to prepare for the children's return the following day.

Paris Mayor Anne Hidalgo told AFP this week that all schools and kindergartens will be thoroughly clean ahead of the reopening.