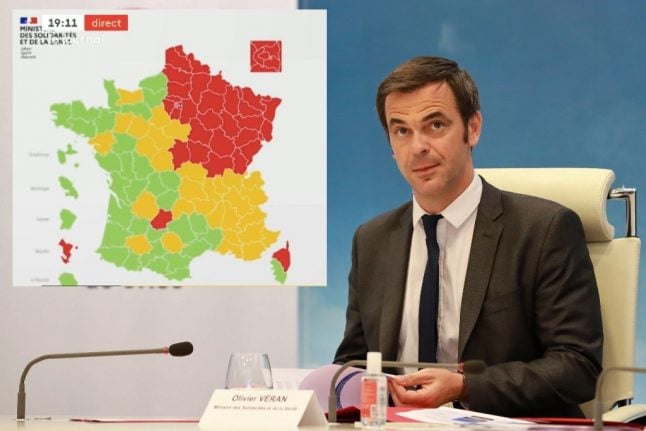 When he presented his plan for lifting the lockdown on Tuesday, Prime Minister Edouard Philippe said that each of the country's 96 mainland départements would be given a colour – red or green – that determined how the lockdown would be lifted.

The final designation for each départment will not be made until May 7th, but Health Minister Olivier Véran presented the first map live to the press on Thursday evening, stressing that the current presentation was just indicative and would be adapted in the weeks to come.

“This map is not changing anything about the current lockdown,” he said.

“There is absolutely no doubt that we still need lockdown now, stay home until May 11th.” The situation in each département will be updated regularly after May 11th.

Three criteria are used to apply the red or green rating are;

Véran's presentation on Thursday however only showed on two criteria – infections levels by départments and pressure on intensive care units per départment. The initial maps showed 35 départements in red, almost all concentrated in the east of the country and the area around Paris.

The maps the health minister showed on Thursday contained orange zones in addition to green and read.

“There will be red and green zones, but we have included orange to show the areas that can shift to both colours before that date,” Véran said. The combination of the two gives an initial rating to each départements, with orange showing those where the situation is uncertain

The goal was to give local authorities an idea of where they stood and what measures needed to be taken for them to turn into a green zone on May 11th.

It was still largely unclear what exactly the end of lockdown would mean for those départements coloured red in terms of the stricter restrictions which may still apply.

Health Minister Olivier Veran said: “It will be possible if necessary to close schools, to close a certain number of shops and outdoor spaces.”

During his presentation to parliament Prime Minister Philippe stressed that the goal was to tailor measures to each area.

“Areas will be green or red, but everywhere there will be an intense discussion to adapt measures to local needs,” Philippe said.

“Its the partnership between local officials and actors on the ground that will let us steer clearly to manage the circulation of the virus,” he said.

France’s official coronavirus death toll on Thursday increased by 289 – 192 in hospitals and 98 deaths were registered in the country's nursing homes for elderly (Ehpad).

In total, France counts 24,376 coronavirus fatalities since the beginning of the epidemic. Of these 9,132 occurred in the country's Ehpad.