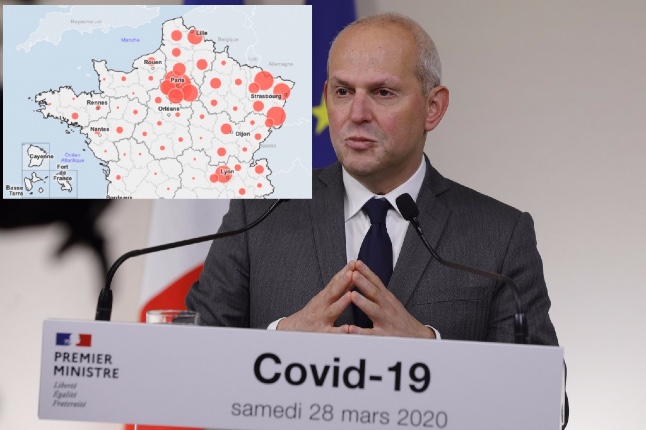 France's Director General of Health Jérôme Salomon has been a nightly feature in French homes during the coronavirus epidemic. Photo: AFP

When presenting the detailed nationwide plan for how France will begin to lift its lockdown measures from May 11th, Prime Minister Edouard Philippe introduced a new concept – red départements and green départements.

Not previously discussed by the government, this idea is based on looser restrictions for départements where there are fewer cases of coronavirus and where local health services are coping well and tighter restrictions for areas where the virus is still prevalent and hospitals under pressure.

There have been huge disparities in case numbers across France, with thousands of people dying in Paris and in the east of the country while several départements have recorded fewer than 10 deaths. Most of the south west of the country for example has largely been spared.

The government has therefore decided that it makes sense for areas with fewer cases to be allowed to do things like reopen parks and secondary schools, while areas with a high number of cases will have more restrictions.

To this end, every one of France's 96 mainland départements as well as its overseas territories will be given a designation – red or green.

Starting on Thursday, France's Director General of Health Jérome Salomon, who has become a well-known figure in the country with his calm and measured nightly briefings on coronavirus death tolls and hospital patient numbers, will also present every evening an inventory of the situation in each département.

This will give local officials time to prepare, and the département will be given its red or green rating from May 7th.

“This map will guide each département for the preparation of May 11th,” said the PM adding that in the “red” départements the end of the lockdown or deconfinement “can take a more strict form”.

Philippe didn't however list exactly what restrictions would be in question.

But he did give certain examples of measures that could depend on the colour of a département, notably the reopening of secondary schools (colleges), which are run by départements as well as the reopening of public parks, gardens and other open spaces, which would only take place “in départements “where the virus is not actively circulating.”

Three criteria are used to apply the red or green rating.

The situation in each département will be updated daily in Salomon's evening briefing.

Philippe told the French parliament on Tuesday: “Not all areas have been affected in the same way.

“It is therefore logical that, while remaining extremely cautious, we propose a déconfinement framework adapted to the local realities of France and its overseas territories.

“This map will thus guide each départment in the preparation for May 11th, recalling the objective of a strict containment, to reduce the circulation of the virus, but also the need to put the hospital system back on its feet and to set up an effective system of tests and detection of contact cases.”

Even within the mapping system, local officials will still have the authority to add extra measures if they deem it necessary.