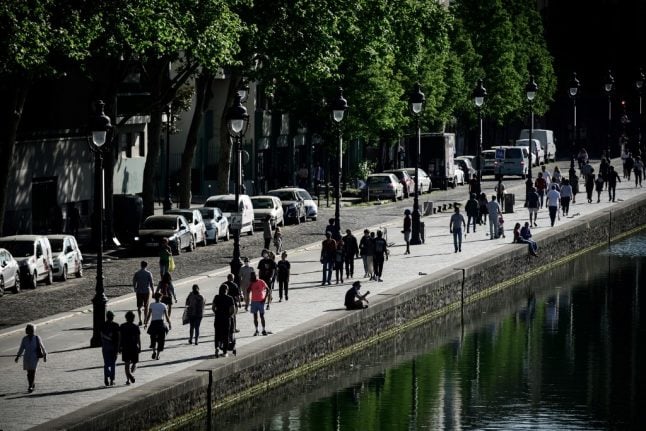 The sunny weather is tempting many outside. Photo: AFP

In Paris joggers packed sidewalks and paths of public lawns, in particular at the forested Boulogne and Vincennes parks at opposite ends of the city, over a weekend of fine summery weather.

And social media was abuzz with a video of a few dozen people dancing in a Montmartre square to the tune of Dalida's “Laissez-moi Danser” (Let me Dance) on Saturday night.

Police showed up nearly immediately to disperse the crowd, and the DJ reportedly promised to no longer blast songs from his window.

But a police source told AFP that no tickets were handed out for breaching the confinement rules, which can see people without a valid reason to be out fined €135.

“Overall, Parisians are being civic-minded,” said Pierre-Yves Bournazel, a city council member for the 18th arrondissement where the impromptu disco took place.

“But if we want to avoid new contagions, we're going to have to respect the measures in place,” he said.

Meanwhile residents in other French cities reported seeing more and more people out and about since it was announced that France will begin easing its lockdown rules from May 11th.

In Bordeaux two people were arrested on Sunday nights after dozens of people on scooters staged a 'moto rodeo' through the streets of the city.

In Lyon people in the Guillotière area called on the police to do more to keep people indoors.

Meanwhile residents in cities across France reported seeing more and people on the streets in recent days as the fine weather continued.

Overall, police have issued more than 900,000 fines since the lockdown began on March 17th.

But as Prime Minister Edouard Philippe prepares to lay out post-confinement plans on Tuesday, more city-dwellers could be tempted to get out of cramped apartments before May 11th, when some stores and schools are set to reopen.

Mickael, one of the hundreds of Parisians along the Ourcq canal over the weekend, told AFP that “from a humane perspective, it's not easy staying cooped up in a house all day long. Humans aren't designed to live like that, isolated like that.”

Eric, wearing a bandanna over his mouth and nose, admitted that he had been going out every day “to walk around the block and get some exercise”.

“You can put a cross for fitness, so there you go,” he said, referring to one of the seven allowed reasons for leaving on the self-signed document everyone must carry when going out.

Emmanuel Latil, one of the dozens of public safety officers deployed across Paris, spent the weekend urging people hanging out in the Bois de Vincennes on the eastern edge of the city.

“The security ribbons forbidding access were torn down, so people didn't realise they weren't allowed in,” he said.

He later told two women in the park: “Be careful. I can see you've touched the benches, so wash your hands well before touching your faces.”