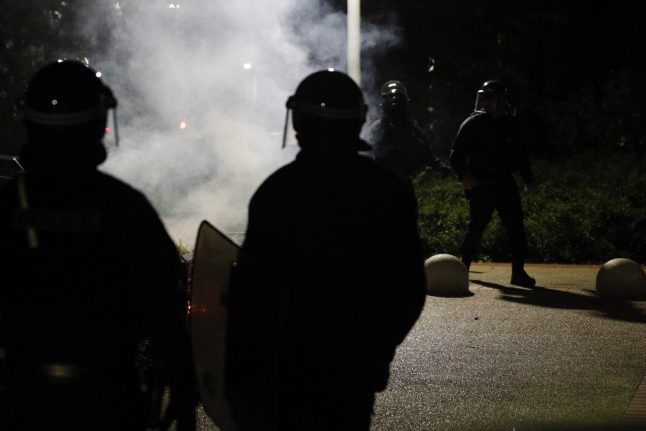 There have been several nights of trouble in the Paris suburbs over the pas couple of weeks. Photo: AFP

The film – widely circulated on social media – was shot in Seine-Saint-Denis, one of the Paris suburbs that has seen several clashes between police and locals over the enforcement of the lockdown rules.

The video, which a local man says he filmed from his bedroom window, shows police with a suspect who they have just arrested after pulling him out of the river.

Officers are heard to call him a racist name before one adds they “should have put a ball and chain on his foot”.

The video was posted on Facebook by two local journalists, who said they received it from the resident who wants to remain anonymous.

The officers, reported in French media to be from the Asnierès station in Hauts-de-Seine, were responding to calls of a burglary on a building site and chased a suspect into neighbouring Seine-Saint-Denis where he jumped into the river.

The video, said to be filmed in the early hours of Sunday morning, shows the officers after the suspect had been pulled out of the river, he is then put into the back of the police van and there are thuds and several cries. There have been several nights of trouble in the Paris suburbs. Photo: AFP

The suburbs of Hauts-de-Seine and Seine-Saint-Denis have seen several days of tensions and running battles with police after a motorcyclist was seriously injured in a police stop.

Over several nights fireworks were set off, bins set alight, police officers targeted and a school damaged in an arson attack.

Tensions seemed to have cooled after the wounded motorcyclist pleaded for calm from his hospital bed.

David Le Bars, general secretary of the syndicat des commissaires de la police nationale union, said in a statement: “What you see and hear on these videos is a reflection of unacceptable behaviour. There must be a prompt investigation and, if the facts are proven, sanctions.”

The charity SOS Racisme has written to Interior Minister Christophe Castaner to ask him to launch his own investigation, on top of the one by the police watchdog the IGPN.