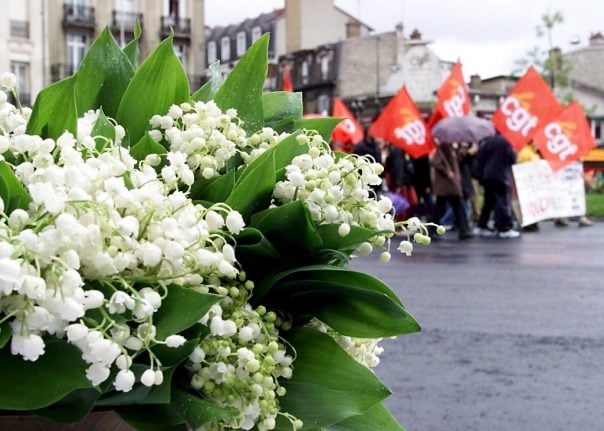 May 1st will look a little different this year. Photo: AFP

May 1st is usually a big holiday in the nation's calendar, but this year things will be a little different.

May 1st falls on a Friday this year so most people get a day off work, although that is a largely theoretical concept to the millions of people unable to work due to the lockdown.

French bank holidays are taken on whichever day they happen to fall on the calendar meaning that in 2021 and 2022 May 1st falls on a weekend and therefore doesn't mean an extra day off.

To really rub salt into that wound the same also applies to May 8th, which is usually a public holiday in France to mark the end of World War II in Europe. Social distancing rules mean that this type of protest will not be possible this year. Photo: AFP

Also known as the Fête du Travail, or Labour Day, May 1st is usually a day of widespread union-organised demonstrations.

Although protests and demos seem quintessentially French, this tradition is actually borrowed from the USA and a huge strike in Chicago in 1886.

Three years later, France decided to establish an “International Workers' Day” with the same goal, but it didn't officially become a paid day off until 1941 under the Vichy regime.

This year street demos are obviously out, but unions are still keen to mark the day and have instead invited people to demonstrate on their balconies.

The theme of the protests is the 'forgotten workers' – the low-paid but essential workers who have kept the country running during the weeks of lockdown. The lily-of-the-valley is the traditional May Day flower. Photo: AFP

But it's not all protests, some people mark the day with flowers.

On the first of May in 1561, France's King Charles IX was given a muguet flower, or lily-of-the valley in English, as a lucky charm and liked it so much that he decided to offer them each year to the ladies of the court.

They're usually sold in florists on by street sellers, neither of which will be possible this year.

However the country's agriculture minister Didier Guillaume has moved to reassure people that they will still be able to get a May Day muguet – this year they will be available in supermarkets and other 'essential' stores that are allowed to remain open during the lockdown.

He has also called on people to buy them to show solidarity with under-pressure French growers.

In medieval France, this time was a celebration of the season rather than of the workers.

This tradition is best preserved in rural areas of France, such as the mountainous department of Isère, or the south west town of Cahors, where the weekend surrounding the 1st is usually one of celebration, using it as an excuse to come together and enjoy the good weather, with parades and markets of regional products.

Sadly this won't be possible this year, and the far right political party Rassemblement National's usual May 1st 'patriotic banquet' won't be happening either.

This is one of the more quirky May Day traditions and involves young men in some parts of France cutting down a tree during the night between the 30th of April and May 1st and then replanting it by the door of the woman they hoped to marry.

Other versions of this tradition saw the May tree placed in front of a church or at the home of a newlywed couple.

It was pretty much a historical relic anyway and we're not sure which box you would tick on the lockdown permission form to cover tree-related courting rituals.