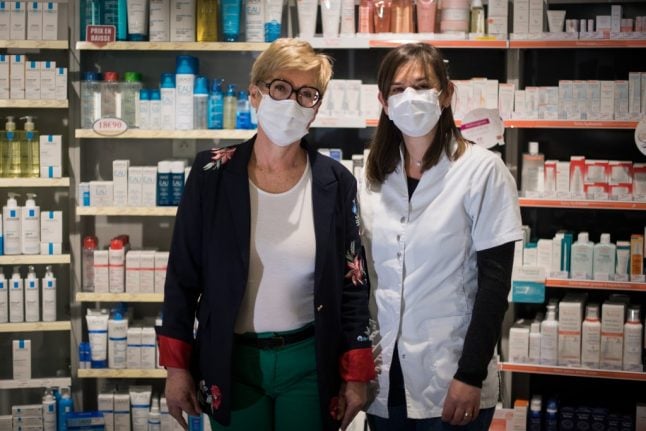 At the beginning of the outbreak, worried about shortages and hoarding, the French government requisitioned all the country's supply of masks.

They were distributed to healthcare workers but for the general public a prescription was needed in order to buy one at a pharmacy.

Now, as production is stepped up and public health bodies advise that people should be wearing masks for trips outside the home, the government has allowed their over-the-counter sale again.

The decree published in the Journel Officiel on Saturday says that pharmacists are now allowed to sell washable fabric masks. Many pharmacies ran out of masks early in the outbreak. Photo: AFP

The health ministry added that the basic mask will cost between €2 and €5.

However the masks remain in short supply in most areas.

“The pharmacies will now be able to order non-specialist masks, manufactured according to an industrial process and meeting the applicable technical specifications.

“So there is no point in going to pharmacies on Monday to buy masks,” Philippe Besset, president of the Federation of Pharmaceutical Unions of France (FSPF), told BFMTV.

At present wearing a mask is only advised, but when the lockdown starts to be loosening on May 11th, it looks likely that they will be made compulsory in some areas, including on public transport.

The Prime Minister will set out on Tuesday morning details about the ending of the lockdown.

The country's Junior Economy Minister says that widespread distribution of masks to the population will start from May 4th, although some local authorities in areas including Nice and Cannes have already begun handing them out.

In the meantime many people have resorted to making their own masks, although health minister Oliver Véran said that many home-made masks were “useless” as they did not meet technical specifications.

Over the weekend French police seized 140,000 face masks intended for the black market in a record haul since the start of the coronavirus pandemic.

Two individuals were arrested while they were unloading boxes in Saint-Denis, just north of Paris, a police source said on Sunday.

One of them said he was a business owner and had bought the masks, including 5,000 high protection FFP2 masks, in the Netherlands for a total of €80,000.

The masks were to be sold to construction workers for a large profit, according to police.