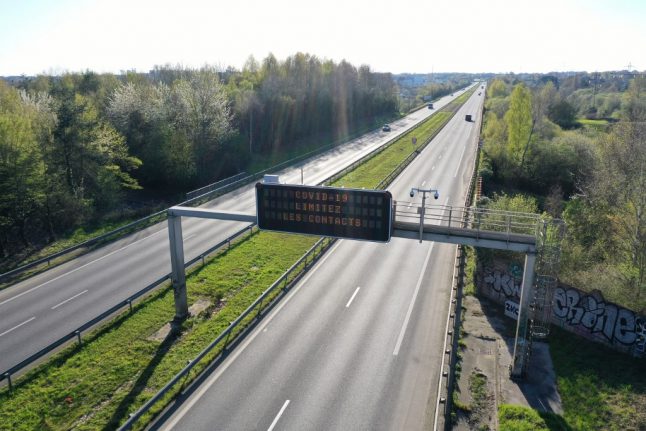 Roads have been largely empty since March 17th. Photo: AFP

*This article has been updated since it as first published, including fresher statements from the Elysée Palace after initial news reports confirmed travel would be allowed.

After a video call with mayors and local government officials, the Elysées Palace has laid out more details of the easing of lockdown restrictions in France, although stressed that these were still “options on the table”.

A more concrete plan is set to be unveiled next Tuesday.

As well as announcing that parents will not be forced to send their children back to school as they reopen, statements from French president Emmanuel Macron's office also touched on the subject of travel around France.

At present all non-essential travel is banned with only trips out of the home for work or to go to local shops or health centres allowed.

But from May 11th the country will start to be gradually reopened, with schools reopening and many employees returning to work.

The Elysée has made it clear that the déconfinement (ending of lockdown) will be done on a national basis, not region by region as some had predicted.

Although local authorities will still be allowed some leeway if there is a particular local need.

According to French media the Elysées Palace also added that “the president is working to ensure that there will be no problem moving from one region to another after May 11th”.

The Elysée told The Local that the issue of travel between regions was still under discussion and no final decision had been taken.

There had been much speculation and suggestions from ministers that travel around France would remain restricted until the middle of June, to avoid any spread of the virus to areas that had so far been largely spared.

The Elysée has come under fire in some sections of the French media for its strategy on releasing the details about how the lockdown will end which have often been contrary to what his own ministers and health chiefs have said.

On Thursday Interior Minister Christophe Castaner said the end of lockdown would not mean “the ability to travel anywhere, anytime.”

And on the same day the country's Director General of Health Jérôme Salomon said: “What will have to be avoided are inter-regional transport and exchanges of population between massively affected areas and less affected areas, (or) this is how we will reactivate the circulation of the virus.

“It is an attitude that we must have during deconfinement, to be very attentive to interregional flows.”

The travel rules will be particularly relevant to the thousands of Parisians who fled the capital at the start of the lockdown to their second homes in the country – it is estimated that the city's population has fallen by 24 percent during the lockdown.

The déconfinement will take place on a “national basis”, “which does not prevent local and territorial adaptations”, adds the Elysée.

Coronavirus cases have not been evenly distributed around France, with the eastern French region of Grand Est and the greater Paris Île-de-France region having far more cases than the rest of the country.

But with around 30 percent of France's GDP concentrated in Paris, there was also economic pressure to reopen the region around the capital.

At present the various ministries are putting together their own plans, which will be gathered into a national plan to be debated by the French Parliament at the start of May.

Once that has happened a more detailed plan for the lifting of lockdown can be released.