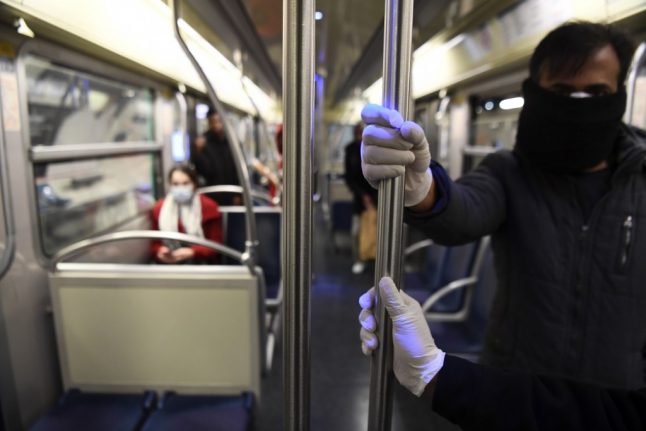 Lockdown in France’s most populated region is still far from over but there is plenty for its five million pre-Covid daily transport users to get used to when restrictions are eased.

“(Measures for) the Île-de-France region will not be implemented overnight”, the head of the region transport’s system Valérie Pécresse clarified, but there are several changes in store from May 11th onwards.

Masks will be compulsory on all public transport from May 11th.

France’s Prime Minister made the announcement during a televised address on Sunday April 19th, a measure that had already been suggested by the country’s health minister and other officials.

“As soon as we start to gradually loosen the confinement measures, our fellow citizens will find themselves in locations where the density of people will obviously be much greater, so we must look at ways of putting up barriers and keeping a safe distance,” Macron said during a televised address to the nation.

This is “likely” to become a nationwide government policy, the health minister said on Sunday, but if not, Paris authorities would still implement it.

Paris mayor Anne Hidalgo confirmed so on the same day, although she said that she would make wearing a mask compulsory during rush hour.

Pécresse also called on companies to equip their employees with masks if “the trip from home to work is part of their working hours”.

Paris mayor Anne Hidalgo also wants to create a network of hand gel dispensers, particularly on public transport such as at bus and tram stops.

The buying of tickets directly on the bus is already forbidden – instead you buy tickets in advance or on an app – and passengers are asked to use the middle door where possible.

Masks and hand sanitising gel are likely to be sold at all shops in Île-de-France’s train and metro stations, according to Valérie Pécresse.

Mayor Hidalgo announced her office would work with French multinational JCDecaux to install the hand sanitiser dispensers in other places outside of the transport network, such as in the streets, at stadiums, swimming pools, schools and nurseries, all free of charge.

Starting on May 11th, Île-de-France transport officials will gradually increase the frequency of the region’s suburban commuter trains.

“The SNCF and the RATP networks should start operating at 50 percent of the normal traffic, compared to the current 30 percent,” Pécresse stated.

Service frequency could also be increased “beyond 50 percent” on certain lines that are particularly busy during the normal rush hour times.

The increase in services will also depend on the pace of at which schools reopen as many of ” the RATP, SNCF, Optile and buses operators currently have a high rate of absenteeism among them, almost 40 percent, because a good part of them have children to take care of ” Pécresse explained.

The city's crowded Metro system is probably going to prove the most challenging area to respect social distancing in, even with masks and hand gel, so the mayor wants as few people as possible to use it.

Instead she plans to increase cycle lanes, particularly along existing Metro routes.

“I'm thinking of temporarily laying out routes above the busiest Metro lines so that people who feel safer on bikes can get around,” she told the paper.

“In concrete terms, we want to double lines 1, 4 and 13 by above-ground bicycle networks on the same routes.”

The mass transport strikes in France in December and January saw many people taking to their bikes as an alternative to public transport, and the mayor is hoping that some of them will revert to this once the city starts to go back to work from May 11th.

The Prime Minister has also asked that anyone who can work from home continues to do so in the months ahead.

The French government will present its more detailed plan for the loosening of lockdown at the end of April. Working from home until the summer

“If we implement the safety distance measures we all know, we will only be able to take 20 percent of travellers,” the head Île-de-France Mobilités stressed.

Pécresse is therefore calling on all companies in the region to allow the highest number possible of their employees to work from home.

“We will have to continue working from home en masse after May 11th and until the summer because we have to avoid overloading our public transport system,” she stated.

“There has to be far fewer than 5 million regular passengers”.

The current number of daily transport users in the region’s network is around 500,000.

To avoid an influx of public transport users during rush hour, Île-de-France Mobilités is proposing that companies organise a timetable whereby their employees can arrive and leave in different time slots.

” We will work to smooth out peak hours with our social partners and local authorities in order to avoid the crowds,” said France’s Minister of Transport Jean-Baptiste Djebbari.

Not advisable to commute by car

Some mobility and pollution experts fear there could be a spike in private transport usage as commuters opt for using their car to avoid exposure to Covid-19 on public transport.

“In China, we’ve seen that traffic congestion has returned to the same levels as last year, whilst the number of people used the metro is just under 50 percent,” Joël Hazan, mobility expert at the Boston Consulting Group (BCG), told AFP.

“This would massively increase the cost of transport for the household budget and could result in huge traffic jams and become a pollution disaster.

It would result in a huge financial hit to Ile-de-France’s public transport system, which has already seen losses of €1 billion since the pandemic began.

“We have to find a way to restore confidence in public transport,” Hazan explains.

“In a city like Paris, we won’t be able to do without public transport. We don’t have a choice!”

French Transport Minister Jean-Baptiste Djebarri has called for “a reinforced cleaning and disinfection plan for trains and buses as well as public spaces in train and metro stations”.