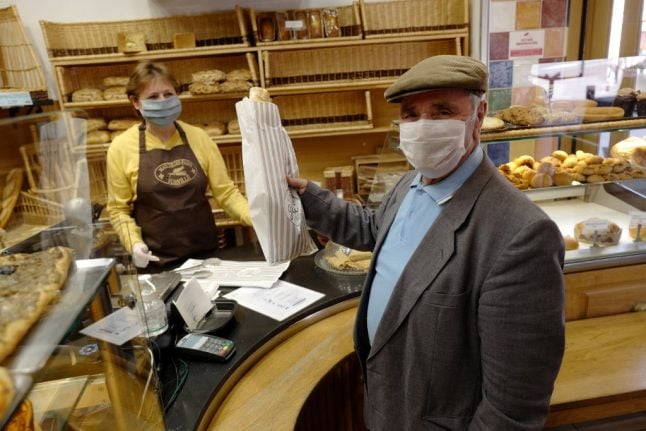 Don't let a global pandemic stand between you and a baguette. Photo: AFP

While there are undoubtedly some people who used the weeks of France's strict lockdown to read the complete works of Proust or teach themselves the oboe, most of us lolled around on the sofa, ate too much and watched a lot of Netflix.

But for foreigners living in France, the lockdown also lead to some interesting insights into the country and its people. Here's what we learned:

Ask anyone for a stereotype about the French and it won't be long before revolutions, strikes and riots enter the conversation. The French do not have a reputation as a people who follow rules gladly and indeed frequently cast themselves as natural rebels.

And yet the French government has imposed on of the strictest lockdowns in Europe on its people, the majority of whom have accepted it.

Yes, there have been a lot of fines handed out for breaking the rules, especially in the early days, but there has been no serious attempt at mass disobedience or revolt against the rules, in general people have accepted that they are necessary and meekly filled out their attestation before leaving the house.

Maybe it's because the tight lockdown conditions give a perfect excuse for indulging in a very popular French hobby – complaining.

We also asked some actual experts in French culture about this – here is what they told us.

The evening pre-dinner drinks ritual is crucial in France, and a little thing like being confined at home wasn't going to stop it. Within four days of the lockdown being introduced 'apéro Sykpe' was trending on Twitter as people came up with a technological solution to enjoying drinks with friends.

And yet it seems that the chatting with friends is more important than the actual drinking. While alcohol sales in the UK and US rose by up to 20 percent as limitations were imposed on daily life, sales of alcohol have actually fallen in France.

Despite a slight rise in sales of rosé and beer as the good weather arrived, overall alcohol sales – including the four days before the lockdown began – fell by 16 percent.

Seems that drinking alone in PJs at 3pm is not so popular in France as elsewhere. Have a socially distanced chat with neighbours while on your daily 1km walk. Photo: AFP

3. Daily baguette is a necessity

So leaving the house at the moment is a little more complicated than usual – involving as it does filling out a signed, timed and dated attestation declaring that the purpose of your trip is essential.

You might think that would be a reason to either cut back on the bread or buy a sliced loaf that lasts a couple of days.

But if you thought that then you probably aren't French. Boulangeries have of course remained opened as an essential business and in cities it's pretty rare to see one without a (socially distanced) queue outside as people wait to buy their baguette.

And it's not just the French, this German man arrives at the French border every day with a fishing rod to winch over his bread fix.

4. The president is quite the TV star

Before the coronavirus outbreak, president Emmanuel Macron's approval rating was trundling along at around 30 percent – although that's not particularly unusual for French presidents.

Jaques Chirac, subject of many gushing tributes when he died in 2019, had an approval rating of 26 percent when he was actually in office, François Mitterand's rating in 1991 was 29 percent while Macron's predecessor François Hollande reached the dizzy lows of 18 percent towards the end of his presidency.

Macron has enjoyed a slight rise since the outbreak, getting up to around 40 percent, but despite the fact that more than half the public regularly tell pollsters that they don't like him, his TV broadcasts have been getting record audiences.

He has made four live TV addresses since the outbreak began with the most recent one – where he announced that lockdown would start to be lifted on May 11th – attracting an all-time record audience of 36.7 million people.

That's more than half the entire population and 15 million more people than watched France winning the World Cup back in 2018.

Although it's not like any of us had the option of going out for a meal instead of watching the president. America elected a TV star as president, in France it seems to be working the other way round. Photo: AFP

We've learned quite a lot of technical and medical vocab during the lockdown – as well as some more creative ways to swear at annoying neighbours – but the French have been busy creating new terms too.

READ ALSO 22 French phrases for use during lockdown

The French for lockdown is confinement so we've also heard a lot of talk of le déconfinement – the great moment when we're all released.

There's also been coined a co-confiné – the person you are confined to the house with.

And even the, largely ironic, bon confinement – have a great lockdown.

Sadly though there doesn't seem to be a French version of covidiot, not that we have heard anyway.

What have you learned while on lockdown? Share your experiences with us at [email protected]